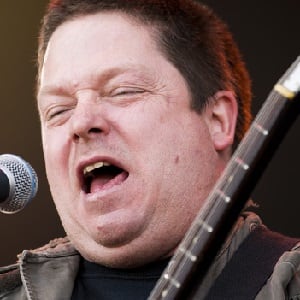 John Connelly has kept most of the information about his personal life away from the media spotlight. Additionally, there are no records available of his past relationships. At present, he is believed to be single.

Who is John Connelly?

John Connelly is an American musician. People mostly know him as the vocalist and guitarist of band Nuclear Assault and New York City thrash metal. He began his career as a roadie for thrash metal band Anthrax.

Connelly was born in the United States on July 28, 1962. He became interested in the world of music since his childhood years. He is of American nationality. Furthermore, there are no details available relating to his ethnic background at present.

Talking about his education, no information is available regarding Connelly’s educational background.

Connelly initially began his career as a roadie for thrash metal band Anthrax. Additionally, in 1983, he formed the band Nuclear Assault alongside Anthrax bassist Danny Lilker. He was also a special vocal guest on the first album of the band ‘Ludichrist’ in 1986. Apart from Connelly’s involvement in the band Nuclear Theory, he has also ventured in a solo project called John Connelly’s Theory.

Furthermore, John Connelly has formed a 3-piece line-up called Rite Bastards. After the band Nuclear Assault disbanded in 1993, they had a reunion show in 2002 through the show Metal Meltdown. In addition, the band released a live album ‘Alive Again’ in 2003. Additionally, in 2005, the band released a new studio album, ‘Third World Genocide’. Connelly also sang the chorus for Municipal Waste’s track called ‘The Fatal Feast’.

John Connelly has not been part of any notable controversies in his career. At present, there are no rumors concerning his life and career.

Talking about John Connelly’s body measurement, there are no details available relating to Connelly’s height and weight. His hair color and eye color is dark brown.

John Connelly is not active over social media. He does not have his official Twitter and Instagram account. Additionally, he is not active on Facebook as well. However, he has several fan accounts on social sites.