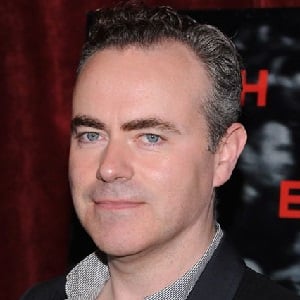 "It seems to me that the idea of transmitting coldness - whether deliberately or unwittingly - might offer an interesting imaginative starting point for a contemporary story, romantic, comic or tragic in tone." - On a particular theme he is eager to produce.

John Crowley is a married man. He is married to the British casting director, Fiona Weir. The pair has a child from this marriage. Their marriage is going strong as there is no news regarding any extramarital affairs at present.

Who is John Crowley?

Crowley was born in Cork, the Republic of Ireland on August 19, 1969. There is no detailed information available relating to his early life and childhood. He is of American and Irish nationality. Furthermore, he belongs to the Irish ethnic background.

Talking about his education, Crowley attended the University College Cork and earned a BA in English and Philosophy and an MA in Philosophy.

Crowley was initially involved in theatre as a student. Additionally, he later became an associate director at the Donmar Warehouse. His first direction was the TV short ‘Come and Go.’ Since then, he has worked on several other movies and television series. At present, he has nine credits as a director.

Some other movie and television series that Crowley has directed are ‘True Detective’, ‘Brooklyn’, ‘Closed Circuit’, ‘Is Anybody There?’, ‘Boy A’, and ‘Intermission’ among others. Furthermore, as himself, Crowley has also appeared in TV series like ‘Made in Hollywood’, ‘Up Close with Carrie Keagan’, ‘Reel Junkie’, and ‘Charlie Rose.’

Crowley has not revealed his current salary. In addition, there are no details available about his net worth at present.

Crowley has not been part of any notable controversies in his career. Furthermore, at present, there are no rumors concerning his life and career.

Talking about his body measurement, there are no details available about Crowley’s height and weight. His hair color is dark brown and his eye color is blue.