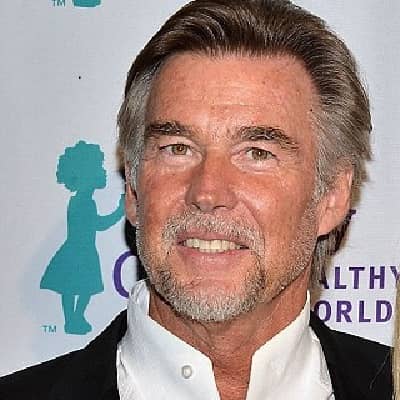 Talking about his love life, John Easterling is happily married to Olivia Newton-John. Olivia is a British-Australian actress and entrepreneur known as Sandy of Grease and Kira of Xanadu. The couple knew each other for around 15 years ahead of their marriage.

The couple tied the knot on 21 June 2008 and their wedding took place following the Incan ritual on a mountain top in Peru.

Later, the couple married legally in Jupiter Island, Florida on 30 June. Easterling supported her wife when Newton suffered from breast cancer. The couple went to Budapest in March 2010 to promote their product.

Similarly, their next visit took place in October 2010 when John accompanied his wife to the anti-cancer lantern walk. Presently, they reside in Jupiter, Florida, and spend more time on travel, environmental protection, and nature conservation.

Who is John Easterling?

John Easterling is a well-recognized American businessman and environmentalist. Easterling currently serves as the CEO and chairman of Amazon Herb Company.

Moreover, he is also famed as the better half of well-renowned singer/songwriter and actress Olivia Newton-John.

John Easterling was born on 10 April 1952. At present, his age is 69 years old. Likewise, his birthplace is the USA.

Not much known about his father and mother’s details, John has been secretive towards his parent’s details. Moreover, he has not revealed his sibling’s information in the public yet.

Talking about his nationality, Easterling holds an American identity whereas his ethnicity is Caucasian.

Regarding education, the entrepreneur attended the University of North Carolina and earned a degree in environmental sciences from there.

After completion of his graduation, John applied for the Peace Corps. Eventually, he left the corps and moved to South America in order to explore adventure. He soon started trade in rare minerals and stones like roses, mountain crystals, opals, etc. His prime real excavation took place a few years after the real voyage.

Likewise, in 1980, Easterling suffered from hepatitis and was near to death. Fortunately, he recovered and again started working. In the year 1990, John was riding a motor canoe along a stream when he began to feel ill. The environmentalist reached a small village but collapsed there upon reaching. Luckily he got a friendly response from the tribe.

Soon, Easterling became acquainted with Dr. Nicole Maxwell, a scientist who had been searching for Amazon herbs for over forty years. He joined him in the journey and their collaboration developed the foundation of Amazon Herb Company in the year 1990. Its headquarter is in the city of Jupiter, Florida.

The company also owns plantations in the Amazon region. It is related to the production and marketing of herbs, cosmetics, and products made from herbs. The company follows the rules and laws of nature conservation and sustainable development.

A successful businessperson, John has earned a massive amount of money from his multiple profession.

The couple bought a mansion in Jupiter Island, Florida which worth $4.1 million in the year 2009. However, they sold the house for $5 million in 2016. It became a scene of a suicide in 2013 when a guy named Christopher Pariseleti shot himself while repairing in the house.

John has never been part of any controversial matter or rumors till now. The environmentalist has been preoccupied with his private and professional life.

It seems that Easterling prefers enjoying his personal life and does not want to merge it with his professional life.

69 years old personality, John Easterling has handsome looks and an admirable personality. He stands at a height of 6 feet 1 inch. Also, he has a balanced bodyweight of 85 kg.

Furthermore, Easterling has hazel eyes whereas his hair is grey. His shoe size is 12(US)

Regarding his social media presence, John Easterling is an active personality on social media. John has more than 3.4k followers on his official Instagram account @therealamazonjohn.

Moreover, Easterling is not available on Facebook with nearly at the moment.

Olivia Newton-John talks about the second relapse of her breast cancer and her homegrown cannabis treatment!