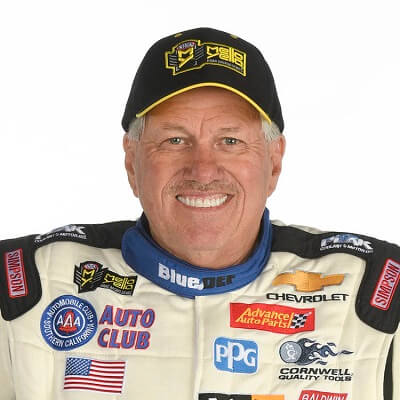 John Force is a married man. He is married to Laurie Force. The couple exchanged wedding vows on 26 September 1981. From their marriage, the couple has three daughters, Ashley, Brittany, and Courtney.

He and Ashley went head-to-head in the first round of NHRA Southern Nationals in Atlanta in 2008 and it was Ashley who came out on top. She is married to Daniel Hood since 13 December 2008. His other daughter, Courtney is married to Graham Rahal since November 21, 2015.

Who is John Force?

John Force is an American NHRA drag racing legend and businessman. He won the NHRA 16 times and is a 21-time champion car owner and holds the more all-time records than any other driver in NHRA history. He owns and drives for John Force Racing (JFR).

He has four older siblings- Walker, Louie, Tom (now deceased), and Cindy Hem, and one younger sibling, Dana Marino. Walker and Louie have worked with John but currently, only Walker works with him. Most of his family members still attend NHRA National events.

He spent his childhood days living in Indian reservations, logging camps, trailer parks, and migrant farms. His ethnicity is Caucasian.

Talking about his educational background, he went to Bell Gardens High School. After graduation, he attended Cerritos College.

As of 2020, John Force has an estimated net worth of around $14 million. His primary source of income is driving, sponsors, and JFR. He made his fortune throughout the years by winning the titles. He is the richest driver alive.

In 1971, Force started driving a Night Stalker Mustang which was his first funny car. Early in his career, he used to drive a Corvette, a Monza, and in the 80s, he switched to an Oldsmobile Cutlass until the end of 1993.

His breakthrough came in 1987 after winning an NHRA. The victories started becoming easier and in 1990, he won his first-ever Funny Car title. John Force Racing became one of the top teams in the sport.

He won an incredible 10 straight Funny Car titles from the year 1993 to 2002. Along the way, he gained fame and became a fan favorite.

In 2015, John announced a partnership with Chevrolet. In 2015, he competed with a new sponsorship deal from Peak Antifreeze.

On August 4, 2019, he won his 150th race at the Magic Dry Organic Absorbent NHRA Northwest Nationals breaking a 25 race winless streak. The same year, he also won the U. S. Nationals.

John stands at a height of 5 feet 11 inches. He weighs around 79 kg. Moreover, he has salt and pepper hair and green eyes.

In 2009, he was fined $10k for making physical contact with an NHRA official during the controversial event with driver Tony Pedregon. He faced his teammate, Robert Hight in the semifinals of the nationals. It Robert had won, he would make it to the Countdown to One but if John won, Pedregon would qualify.

Hight won which led the allegations that John took a dive to help him qualify for the Playoffs.

You may also like to read the Bio, Career, Net Worth, Body Measurements, Social Media, Relationships, and more about Bobby Conte Thornton, Brooks Ashmanskas, Joshua Jackson, and more.

Everything Inside The 37-Years Long Marriage Of American NHRA Drag Racer John And Laurie Force!