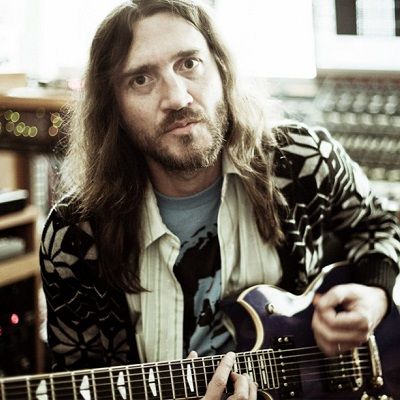 For me it's important to be in balance. To not let fear get in the way of things, to not worry so much about protecting yourself all the time

The main thing experience has taught me is that one has to sort of hone their relationship to time, you know

I think a solo moves forward the way a song does, because it's reflective of the chords that I'm considering as I'm soloing, and at the same time I'm going as much out on a limb as Frank Zappa used to, in terms of just going crazy on the instrument.

Currently, he is dating Marcia Pinna who is an Italian Designer. Previously, John had a relationship with Toni Oswald for about five years. They started dating when they were still just teenagers. Oswald is a musician, visual artist and fashion designer by profession. However, they separated in 1995.

John was also previously married to Nicole Turley. Similarly, he has been engaged to Stella Schnabel. Moreover, he was in relationships with Emily Kokal, Milla Jovovich.

Who is John Frusciante?

John Frusciante is an American guitarist, singer, composer, and producer who is famous as the former guitarist of Red Hot Chilli Peppers. In total, he has recorded five studio albums with the famous rock band.

John Frusciante was born on March 5, 1970, in Queens, New York. His father’s name was John Sr. who was a Juilliard-trained pianist.

In addition, his mother, Gail was a vocalist who gave up her singing career to be a stay-at-home mother for her child. He has no siblings. John is of Italian descent and his nationality is American.

There is no detail information about John’s educational background. However, he did join the Guitar Institute of Technology for some time.

John’s interest started when he attended a Red Hot Chili Peppers performance at a young age. After that, he became a massive fan of the band. He became friends with former Dead Kennedys drummer, D.H. Peligro.

The two jammed together and Peligro also invited his friend Flea who was the bassist of RHCP. John and Flea had an instant bond. RHCP was looking for a new guitarist and Flea suggested the other remaining band member Anthony Kiedis take an audition of John.

He agreed and after the audition, both Flea and Anthony agreed to include John in the band.

John Frusciante, with the new lineup, began recording their first album in 1989. This album was titled  Mother’s Milk. The RHCP collaborated with producer Rick Rubin for their second album with Frusciante, Blood Sugar Sex Magik.

In this time, Frusciante also started a side collaboration with Flea and Jane’s Addiction drummer Stephen Perkins and named it The Three Amoebas. The Three Amoeobas recorded roughly ten to fifteen hours of material.

However, they did not release any of them. Their second album was hugely successful on its release on September 24, 1991. It peaked at number 3 on the Billboard charts and ultimately sold over thirteen million copies worldwide.

John was blindsided by his newfound fame and failed to cope with it. After getting in a number of arguments, four years later, in 1992, he left the band.

After battling with drug addiction for more than five years, John rejoined the band after Flea and Anthony asked him to. With John back on guitar, the RHCP began recording their next album, Californication and released it in 1999.

This was one of the biggest hits of RHCP and gained worldwide recognition. In 2001, John started recording his fourth studio album with RHCP, By the Way which was released in 2002.

He considered this time to be among the happiest times in his life. After more than a decade, John quit the group on July 29, 2009. However, they did not publicly announce his departure until December of 2009.

After his departure from the band, John became more serious about his longtime aim to make electronic music. He released a new EP on July 17, 2012, named Letur-Lefr.

The hits of his solo career include Wayne, Medieval Chamber, Foregrow, etc. He also collaborated with Omar-Rodriguez Lopez.

He and his band won the Grammy Award for the Best Rock Song twice for Dani California and Scar Tissue.

Similarly, he is also the winner of Grammy Award for Best Boxed or Special Limited Edition Package.

John Frusciante developed a serious habit of drugs while touring.

He used marijuana and heroin in an excessive amount. however, after several years, he finally quit drugs and once again joined the band.

Frusciante has an estimated net worth of around $20 million. He has earned such a huge net worth with his long career as a guitarist for RHCP and as a solo artist. His annual salary remains under review. His main sources of income are music.

John Frusciante has a height of around 5 feet 11 inches. Moreover, he weighs around 74 kg. In addition, he has hazel colored eyes and dark brown hair.

John Frusciante is not active on social media sites. However, he does have fan pages on Facebook, Twitter, and Instagram which has a lot of likes.

You may also like to read about the bio, career, net worth of Dave Navarro, Slash, Sean Kinney.