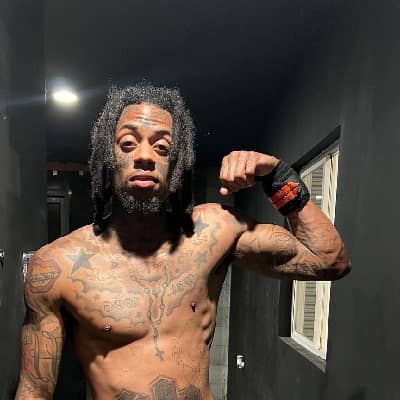 Vicky announced their relationship via a Tiktok video where she shared a video of her and Gabbana, placing a heart and ring emoji in the caption.

Who is John Gabbana?

John Gabbana is a social media personality, singer, and rapper. The Instagram star turned rapper is best known for his videos related to criminal acts as well as his s*xual activity on his Instagram.

John was born on 3 August 1996, in Jacksonville, Florida, U.S. According to his birth date, he is 25 years old as of now. His Zodiac sign is Leo.

He is the son of John Robert Holl Sr. (father) and Simona Ariel (mother). John has 14 siblings, eight on his father’s side and 6 on his mother’s side. At the age of 14, his father passed away, and was raised by his mother and his stepfather Dirk marshall Williams Jr.

Further, he holds an American nationality and he belongs to the All-American ethnicity.

In July 2017, John released his first single titled Muttin. The following year, he released his first EP Dat Boonk Gang S**t on March 18, 2018. He started his rapper career under the name of “Boonk Gang”. Prior to pursuing his music career, he had worked at Miami International Airport. He also worked at a Popeye’s Chicken restaurant.

His other tracks include Boonk Walk, Facts, On Da Block, Wassup, Tupac, and Bossed Up. Gabbana is also popular on Instagram and became a viral sensation with his first video post which featured him at Popeyes, stealing a box of chicken. Later on, he started a Christian hip hop career and his Christian faith help him make a change in his life.

As of now, he is pursuing a boxing career with the name Holy Handz.

In May 2017, he got arrested on the charge of burglary and petit theft for stealing donuts and cursing loudly at Dunkin’ Donuts. John was again arrested as a suspect of possessing assault weapons and illegal narcotics in September 2017.

In July 2019, he posted on social media that he had to go for surgery for having a broken jaw on both sides.

John might have earned an impressive amount of wealth from his career. However, he hasn’t yet disclosed his net worth, salary, and other earnings in the media.

The rapper has a slim body with towering height. He stands at the height of 6 feet tall and his weight is about 67 kg. Likewise, he has a dark brown pair of eyes and he has black hair color.

He has numerous tattoos on his body part including facial tattoos.

The rapper has verified social media sites. He is active on Instagram under the username @sirgabbana where he has more than 1.1m followers. Similarly, he has nearly 315 followers on his Facebook account and 403 followers on Twitter.

He is also active on the Tiktok account with over 167k followers. Similarly, he has a self-titled YouTube channel with over 478k subscribers.

Read the latest: Donald Trump’s wife, Melania Trump has finally shifted to the White House, her dressing styles and rumors about her cosmetic surgery!