John Hekker is married to his wife, Makayla Hekker.

They met each other while attending Oregon State University. Makaya was also part of the athletic in the college like John. Once John won an award in gymnastics and Hekker decided to seek her out on social media.

They began to talk and started dating. The couple married in 2015.

They have two children together. Their one son’s name is Jett Hekker and the name of another child has not been revealed yet. 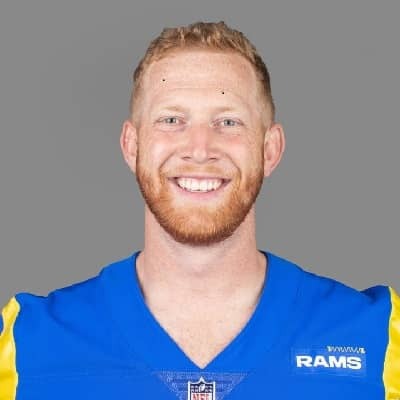 Who is John Hekker?

He is the football punter for the Los Angeles Rams of the National Football League (NFL).

Moreover, John Hekker player has the NFL record for the longest punt in Super Bowl history.

Hekker was born on February 8, 1990, in Redmond, Washington.

Talking about his family, he hasn’t provided any information regarding it. Likewise, he seems to be a single child and doesn’t have any siblings.

The player is of American nationality and Caucasian ethnicity.

He attended Bothell High School, Bothell, Washington graduating in 2008. And then he studied at Oregon State University.

Talking about John Hekker’s college career, he was a four-year starter and ended as one of Oregon State’s most prolific punters.

He has various memorable kicks as a Beaver.

His professional career started in 2012 after he was signed as an undrafted free agent with the St. Louis Rams. The player completed his rookie season with 82 punts for 3,756 net yards for a 45.8 average.

Likewise, on December 5, 2014, Hekker made a six-year, $18 million contract extension with $9 million guaranteed. This deal is considered the largest contract ever given to a punter.

He then made a two-year contract extension with the Rams on September 11, 2017. For the 2019 season, Hekker averaged more than 47 yards per kick for the fourth time in his career.

In 2020, the player was honored NFC Special Teams Player of the Month for the third time. Lately, in 2021, he won Super Bowl LVI when the Rams defeated the Cincinnati Bengals.

The player has a $3 million value of total assets.

Hekker has built a great career and has influenced many people.

He has never appeared in any controversial news in the media.

Also, the player prefers to put his personal information behind the limelight.

The player is 6 feet and 5 inches tall.

He has an athletic built body with blonde hair and beautiful blue eyes.

You may also read the bio of Jeff Green, Alysa Liu, Tate Martell, and Dennis Depay.