John Hurt was an English actor. He is married and a father of two.

John Hurt married a total of four times in his career.

He was married to actress Annette Robertson for two years from 1962 to 1964. Later, he married another American Actress Donna Peacock on 6 September 1984 and they separated in January 1990.

His third marriage was with American production assistant Jo Dalton. The pair tied the knot on 24 January 1990. However, the marriage ended in 1996.

They have two children from this relationship, Nicolas Hurt and Alexander Hurt.

He was married at the time of his death.

He was married to advertising film producer Anwen Rees-Meyers. They were together from March 2005 until Hurt’s death on 25 January 2017. 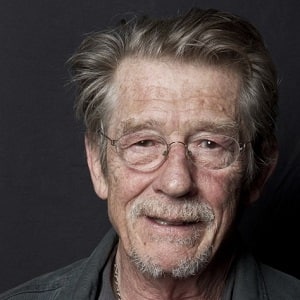 I've done some stinkers in the cinema. You can't regret it

there are always reasons for doing something, even if it's just the location.

We are all racing towards death. No matter how many great, intellectual conclusions we draw during our lives, we know they're all only man-made, like God. I begin to wonder where it all leads. What can you do, except do what you can do as best you know how.

Someone once asked me, "Is there anything you regret?" and I said, "Everything!" Whatever you do, there was always a better choice.

Also, the wonderful thing about film, you can see light at the end of the tunnel. You did realize that it is going to come to an end at some stage.

Who was John Hurt?

John Hurt was an English actor.

Having appeared in numerous movies and television series in a wide variety of roles, he was described as one of Britain’s finest actors.

People mostly know him for his role as Richard Rich in the film ‘A Man for All Seasons’.

Additionally, he also played Mr. Braddock in the Stephen Frears drama ‘The Hit’.

Hurt was born as John Vincent Hurt in Chesterfield on January 22, 1940.

He was born to parents Phyllis and Arnold Herbert Hurt.

His mother was an engineer and his father was a mathematician.

He had developed a keen interest in acting since his childhood years after he joined the Anglican St Michael’s Preparatory School in Otford. He was of British nationality.

Furthermore, he belonged to the English ethnic background.

Additionally, he later joined Grimsby Art School. Eventually, he won a scholarship which allowed him to study for an Art Teacher’s Diploma at Saint Martin’s School of Art in London.

Furthermore, he also trained at RADA for two years.

Hurt landed his first major role in ‘The Wild and the Willing’ in 1962.

Additionally, in the same year, he also appeared in ‘Z Cars’ as James Hogan.

Hurt played the role of John in ‘The Sailor from Gibraltar’ and Guy Beresford in ‘ITV Playhouse’. Since then, he appeared in numerous other movies and television series. in all, he had over 200 credits as an actor.

Some other movies and television series that Hurt appeared in are ‘Damascus Cover’, ‘My Name Is Lenny’, ‘Jackie’, ‘The Journey’, ‘The Last Panthers’, ‘A.K.A Nadia’, ‘Doctor Who’, ‘Only Lovers Left Alive’, ‘Labyrinth’, ‘The Hollow Crown’, ‘Tinker Tailor Soldier Spy’, ‘The Confession’, ‘An Englishman in New York’, ‘The Oxford Murders’, ‘V for Vendetta’, ‘Beyond the Gates’, ‘The Skeleton Key’, ‘The Alan Clark Diaries’, and ‘Owning Mahowny’ among others.

Hurt announced on 16 June 2015 that he had been diagnosed with early-stage pancreatic cancer.

Additionally, he won the Golden Globe Award in 1979.

Furthermore, he also won multiple BAFTA Awards. All in all, Hurt had 21 wins and 16 nominations to his name to date.

Hurt made news after it was reported that he drank heavily after his fiancée French model Marie-Lise Volpeliere-Pierrot died in an accident.

Talking about his body measurement, Hurt had a height of 5 feet 9 inches (1.75 m). Additionally, his hair color was Dark brown/Grey and his eye color was dark brown.

Hurt was active on social media.

Currently, he has a huge number of followers on social networking sites such as Instagram and Twitter.

Margo O’Donnell talks of the time her pride was hurt when her boyfriend jilted her calling off their wedding!