NHL player John Hynes is married and a father of three.

Together, they have three daughters Sophia, Julia, Anna. The couple resides in Warwick, RI. 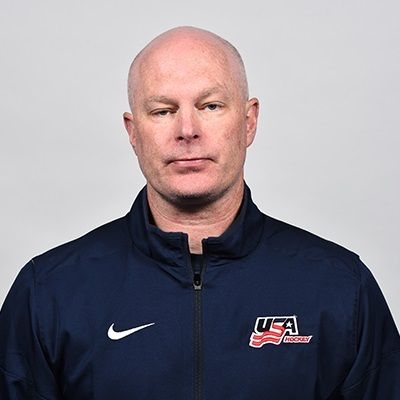 Who is John Hynes?

John Hynes is an American professional ice hockey coach best-known as the former head coach of the New Jersey Devils of the National Hockey League.

On 3rd January 2019, he signed a multi-year contract extension with the New Jersey Devils.

John Hynes was born on 10th February 1975 in Warwick, Rhode Island, US. He graduated from Boston University in Boston, Massachusetts. John received a bachelor’s degree in health and physical education.

He was a three-year letterman for the Terriers as a forward and participated in four straight NCAA Frozen Four Tournament as a youth.

In the year 1995, Boston University captured the 1995 NCAA Division I National Championship in front of Hynes’ home crows in Providence, Rhode Island.

John spent the next six seasons as a head coach with USA Hockey’s National Team Development Program after the 2002-03 season. Similarly, he posted an overall record of 216-113-19-9 as the team’s head coach.

On 4th August 2009, John was named an assistant coach for the Wilkes-Barre/Scranton Penguins. On 31st July 2010, the WBS Penguins announced the Hynes would be the team’s new head coach.

On 2nd June 2015, John was named as the new head coach of the New Jersey Devils of the National Hockey League replacing Scott Stevens and Adam Oates. For the 2015-16 season, he became the youngest head coach in the NHL.

On 5th April 2018, Hynes coached the Devils to their playoff appearance since the 2011-12 season when they defeated the Toronto Maple Leafs.

The estimated net worth of John is $4 million US. His average salary as a hockey coach is $60,000.

The Devils have 9-13-4 and their 22 points were the second-fewest in the NHL and they have the fourth-worst record over the past two seasons at 40-54-14.

John has is clean shaved with blue eyes. He is 5 feet 7 inches tall and weighs around 70 kg.