John Karna is an Amerian actor. He is currently single. 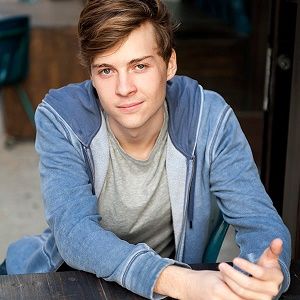 What is the relationship of John Karna?

Get to know John Karna through his  gallery linked in Social Media.

Oct 8: And yes, we may just have the tweets of all tweets from John Karna (@johnny_k): “I don’t know what to say that could help any of this.

Feeling heartbroken for every person affected by all of this senseless mass violence. We have to find a way to break this cycle of hate. Sending out much love today.”

Who is John Karna?

John Karna is an Amerian actor.

He is famous for the role of Noah Foster on the MTV horror series Scream. He has appeared in many television series like American Storage, Modern Family, and The Neighbors.

John Karna was born John Timothy Karna, on 18th November 1991 in Houston, Texas, US. He is the son of James Timothy Karna and Carol Anne. John has a half-brother named James Theodore.

He spent his childhood with his family of mixed ethnicity- Finnish (paternal grandfather), Irish, and English ethnicity.

A Scorpio, he belongs to the Generation Millennials.

John studied Music at the University of Oklahoma’s Weitzen Hoffer School of Musical Theatre. He studied for two years to pursue his passion for being a stage performer.

While he was in high school John made a film named ‘Bindlestiffs’ along with his friends and submitted it to the 2012 ‘Slamdance Film Festival’. It won him the Audience Award.

He started his career with Bindlestiff’s movie which was written and directed by two of his friend from high school in 2012. John Karna appeared in ‘Premature’.

In ‘Premature’ he portrayed the main character ‘Rob Crabbe’. He is famous for the character in the horror series Scream Noah Foster.

His fans and other artist praised him for the series, Scream.

Many shows invited him as a guest artist so John moved to Los Angeles in search of better opportunities.

John made a film named ‘Bindlestiffs’ along with his friends and submitted that film to the 2012 ‘Slamdance Film Festival’. It won him the Audience Award.

John is one of the ten biggest breakout stars of 2014 according to Indiewire.

John Karna: Salary and Net Worth

And get to know John Karna better through his trailers.

You may also want to know the biography, single and married status, net worth, and latest releases of  Senta Moses and Carlson Young.