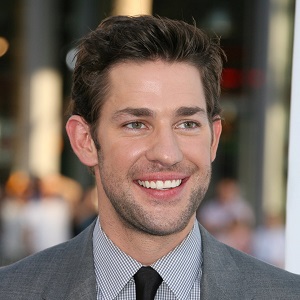 Being funny is one of my greatest strengths. I can make girls smile when they're down, and when they're having a good time, I can carry on the joke

My main focus is to always try to be myself first, and then, hey, if I wear a cool jacket, that's a bonus

Boston is actually the capital of the world. You didn't know that? We breed smart-ass, quippy, funny people. Not that I'm one of them. I just sorta sneaked in under the radar.

John Krasinski is a married man as of now. He is married to a beautiful actress, Emily Blunt. They started dating in November 2008. After dating for a couple of months, they got engaged in August of 2009. Finally, the lovebird got married on July 10, 2010.

Previously, John was in relationships with Renée Zellweger in 2007 and Rashida Jones in 2005/06.

Who is John Krasinski?

Massachusetts-born John Krasinski is an actor. Presently, he is remembered for starring in the NBC comedy-drama series, “The Office”. His portrayal of the character, Jim Halpert is appreciated by all.

Furthermore, he is also a famous director, producer, and screenwriter. He is active in the acting field since 2000. He is an American citizen. Additionally, he has also featured in films like “13 Hours: The Secret Soldiers of Benghazi”, “Promise Land”, and others.

His latest work is in A Quiet Place Part II which released on 28th May 2021.

John was born in the Harlem area in New York City in the state of New York. He was born to his parents, Mary Clare(mother) and Ronald Krasinski(father).

Mary is a nurse and Ronald is an internist. Born on October 20, 1979, he is 37 years old as of now. His ethnicity is of Polish-Irish. Along with his brothers, Paul Krasinski and Kevin Krasinski, his parents raised him in a Roman Catholic faith.

For his education, he went to Newton South High School. He graduated from there in 1997. Afterward, he enrolled at Brown University for his further study. Later, he joined the National Theater Institute in Waterford, Connecticut.

John Krasinski’s career started in his school days. But professionally, his career initiated in 2000. In 2000, he featured in a film named “State and Main”. He played a minor role in it.

He went on working hard and looking for a better role. Until then, he portrayed several minor roles in films like, “Taxi”, “Kinsey”, “Alma Mater”, and so on. AS per his film career, in 2009, his acting got acclaimed by many in the film, “Away We Go”.

Additionally, his other films are “Promise Land”, “Aloha”, “13 Hours: The Secret Soldiers of Benghazi”, “Big Miracle”, and others.

Contrary to the film, he debuted on TV in 2003 in an episode of the TV series, “Ed”. His TV career rose to fame in 2005 when he joined the cast of “The Office”. It is an NBC comedy-drama series that aired from 2005 to 2013. He played the role of Jim Halpert in it. He won several awards for his acting.

As a multi-talented guy, he earns the salary from him multiple projects. He earns a hefty amount of income for sure. This has helped him to add up a huge amount of net worth. Presently, his net worth is estimated to be around $80 million.

John was part of the controversy. It was when he criticized politicians for exploiting his movie, “13 Hours: The Secret Soldiers of Benghazi”.

Other than that, he keeps himself away from any media controversies. Therefore, as of now, there are no rumors and criticism regarding his work life.

John Krasinski stands tall at the height of 6 ft 3 inches. His waist size is around 34 inches. Similarly, his chest size and biceps are 42 inches and 15 inches.

Discussing his body weight, he weighs around 86 kg or 190 pounds. He has dark brown hair color and hazel eye color.