Artist John Lithgow is married and a father of three.

John Lithgow is married to UCLA history professor, Mary Yeager. The couple gets married on December 12, 1981. Mary is the second wife of Lithgow. The duo has also two children named Nathan (Son) and Phoebe (Daughter).

His first was Jean Taynton who is also a former teacher by profession. The duo tied the knot on September 10, 1966, unfortunately, their marriage didn’t last longed and divorced in 1980. Together they have a son named Ian Lithgow (b.1972) who is also an actor.

He has two grandchildren through his son Ian. 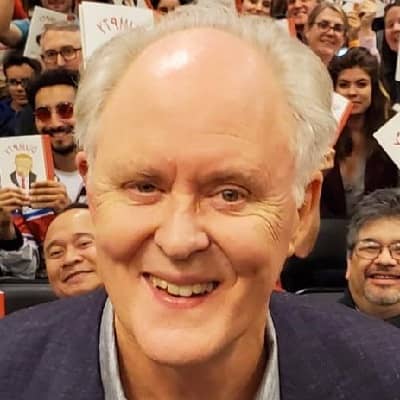 Who is John Lithgow?

John Lithgow is an American versatile stage and character actor. Also, he is an author, musician, singer, and poet. He is best known for playing the role of Dick Solomon in the NBC sitcom ‘3rd Rock from the Sun’.

He portrayed a significant role as the first Prime Minister of the UK, Winston Churchill In the Netflix original historical drama web television ‘The Crown’.

John was born into a theatrical family on October 19, 1945, in Rochester, New York, U.S. His full name is John Arthur Lithgow. He holds an American nationality and belongs to mixed ethnicity (Welsh, English, Scots-Irish, Nothern Irish, and Scottish).

The name of his parents is Arthur Washington Lithgow III (father) and Sarah Jane (mother). His father is a former producer and director and has owned the McCarter Theatre in Princeton, New Jersey. Similarly, his mother is a former actress.

He has also a sibling named Robin Lithgow.

John attended Princeton High School, Princeton. He received his bachelor’s degree in history and literature from Harvard College in 1967. While at Harvard he takes extensively participated in student theatre, acting, and directing. He performed in Gilbert and Sullivan’s Utopia Limited at Harvard.

Similarly, he studied at the London Academy of Music and Dramatic Art on Fulbright Scholarship. After graduation, he worked as the Director of the Arts and Literature Department at WBAI, the Pacifica radio station in New York City.

John made his childhood acting debut through his father’s productions. In 1972, he made his big-screen debut in Dealing: Or the Berkrlry-to-Boston Forty-Brick Lost-Bag Blues.

The following year, he played a dim British rugby player in his Broadway debut in The Changing Room. After then he regularly appears on Broadway such as Mt Fat Friend (1974), A Memory of Teo Mondays (1976), Bedroom Farce (1979), Beyond Therapy (1982), and more.

He directed and choreograph Bob Fosse’s autobiographical All That Jazz and also appeared as Lucas Sergeant. He gave his voice to the character of Yoda in the National Public Radio adaptations of The Empire Strikes Back and Return of the Jadi.

In the early and mid-2000s, Lithgow played the role of J. J. Hunsecker in the Broadway adaptation of the 1957 film Sweet Smell of Success at the Martin Beck Theatre. In 2004, he starred in the life story of comedian Peter Sellers-based film, The Life and Death of Peter Sellers.

Throughout his career, he has appeared in almost forty television shows and films. He received his first recurring role in the television show 3rd Rock from the Sun as Dick Solomon in 1996.

He appeared in TV productions like How I Met Your Mother’, ‘Once Upon a Time in Wonderland (voice), and ‘Drunk History, Twenty Good Years, and more.

Lithgow released his first album with Singin’ in the Bathtub, a 1999 album of children’s music. Similarly, his second children’s album Farkle and Friends released in June 2002. He has also published a book of poems and illustrations named Dumpty: The Age of Trump in Verse in October 2019.

Further, some of his books are Marsupial Sue, Marsupial Sue Presents “The Runaway Pancake”, Lithgow Party Paloozas!: 52 Unexpected Ways to Make a Birthday, Holiday, or Any Day a Celebration for Kids, and more.

He was awarded a star on the Hollywood Walk of Fame and was enlisted into the American Theater Hall of Fame. In 2019, he was elected to the American Philosophical Society.

The actor has an accumulated net worth of around $45 million throughout his multiple profession as an actor, musician, and author. He received $75,000 per episode while performing in the sitcom television series 3rd Rock from the Sun in the 1996-1997 season.

Similarly, in the 1999-2000 season, his salary was granted $200,00 per episode. He was the highest-paid actor on The Crown even though he had less screen time than the main character Claire Foy.

The 75 years old actor is still physically fit and healthy. He stands at the height of 6 feet 3 inches tall and weighs about 78 kg. He has a blue pair of eyes and grey hair.