John Maucere is an American renowned actor. He is a married man and a father of two children.

John Maucere is a married man and a father of two children. He is married to Lauren Abbott Maucere who is an educator and a budding advocate. The couple met in the year 1995 then after a year they started dating.

They tied the knot on the 27th of May 1999. Together the couple is proud parents of two children a son and a daughter. On July 30, 2011, they welcome their first child a daughter named Daniela Maucere.

Similarly, they welcomed their son named Gianni Fortunato Maucere on the 26th of September, 2014. 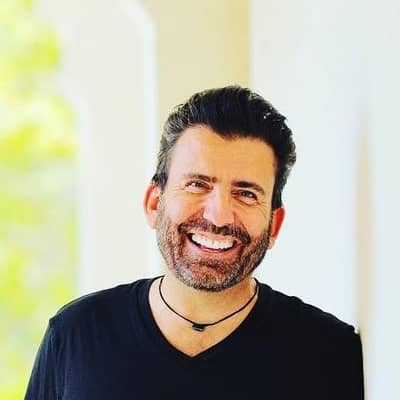 John Maucere is an American renowned actor who is best known for his starring role in No Ordinary Hero: The SuperDefy Movie. Besides he is a deaf comedian and sign language advocate.

John was born on the 3rd of February 1964, in the United States as a deaf child. He is 57 years old as of 2021. Talking about nationality, he holds an American citizen and belongs to the Caucasian ethnicity.

The actor hasn’t yet shared the details information about his parents. However, he has an older brother named Paul Maucere who is a producer by profession.

Moving towards his academics background, he graduated from California School for Deaf, Riverside. He then attended Gallaudet where he was one of the rally leaders who led Gallaudet through the 1988 Deaf President Now (DPN) movement.

Afterward, he joined the National Theatre of the Deaf (NTD) and toured for two years. Then he completed his Bachelor’s degree in Deaf Studies at CSUN.

John is the first deaf actor to take part in ABC’s Talent Development Program along with Arsenio Hall and Tom Hanks. Afterward, he appeared in several television shows such as ABC’s “Park Kane” and “10-8“, NBC’s ” Law and Order” and ” Brand New Life“, and USA Network’s “Pacific Blue“.

Maucere has done sketches at the Hollywood House of Blues along with Cheri Oteri and Eva Longoria. He performed the National Anthem and America the Beautiful at the National Association of the Deaf (NAD) alongside Alicia Keys and Jennifer Hudson.

Similarly, he founded DEAFYWOOD which completed its 13-year tour in 2007. He was the headliner for the sold-out crowd of 4,000 on Royal Caribbean’s Deaf Freedom Cruise with Passages Deaf Travel.

Furthermore, he appeared in the 2013 family-friendly drama film, No Ordinary Hero: The SuperDeafy Movie where he portrayed the role of Tony Kane/SuperDeafy. The film features personalities like Michelle Bunes, Zane Hecker, and more.

On July 1, 2017, Maucere performed at the ASLTA 2017 Closing Ceremony where his performances had inappropriate content, uncomfortable bullying in the guise of humor, and make members feel unwelcome and unsafe for which he personally apologized later via video. Also, the newly elected President Keri Brooks apologize for his performance.

Joh might have accumulated a handsome amount of fortune throughout his successful acting career. But he hasn’t yet disclosed the exact figure of his net worth, salary, and other assets in the media.

The actor has an athletic body type with brown hair color and a brown pair of eyes. Further, there is no information available regarding his other body measurement.

Similarly, he has a self-titled YouTube channel with nearly 3.48k subscribers. He has a Tiktok account with 1.6k followers.