John McCook is an American actor who is popular as Eric Forrester on the television soap opera ‘The Bold and the Beautiful. He is married to Laurette Spang.

Currently, they are happy and living peacefully together. They are appreciated by the fans. The love birds have been together for four decades. They are blessed with three children, Jake Thomas (born in 1981), Rebecca Jeanne (born in 1983), and Molly McCook, an actress (born on July 30, 1990). Currently, the McCook family lives in the Greater Los Angeles Area.

Before that, he also married Marilyn McPherson and also divorced her in 1971. 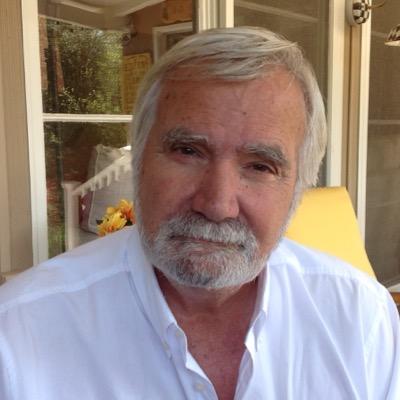 Who is John McCook?

John McCook is an American actor who is popular as Eric Forrester on the television soap opera ‘The Bold and the Beautiful.

His father’s name is Daniel McCook, a laborer in the oil fields, and his mother’s name is not revealed yet. Likewise, his father became deaf genetic and his work in machinery fields. Similarly, he is the single child of his parents.

Moreover, his nationality is American and his birth sign is Gemini.

Talking about his education, he enrolled at California State University Long Beach.

Before making his public appearances on TV he has appeared in several Local theaters and programs. He was first featured in Tv Series ‘No Time for Sergeants‘. After appearing in several movies, television series, he gained fame and recognition as Lance Prentiss in the TV soap The Young and the Restless from 1976 to 2021. Furthermore, he was seen in ‘Code Name: Foxfire’, ‘Mister Roberts’ ‘Romance Theatre’, ‘Dragnet 1967’ and ‘O’Hara, U.S. Treasury.’

At present, he is portraying the role of Eric Forrester on the television soap opera ‘The Bold and the Beautiful’. Currently, he and Katherine Kelly Lang are the show’s two longest-serving actors.

According to the TVOverMind report, the average veteran soap opera superstar makes about $5,000 per episode.

John is living his life quite simple and uptight. McCook hasn’t fallen for any controversies or rumors till now.

McCook stands 6 feet and 2 inches tall and his weight is unknown. He has white hair and brown eyes.

John is active on social media. He has over 25.2K followers on Twitter and more than 45.8k followers on Instagram.

Lane Garrison
Tags : Actor The Bold and the Beautiful The Young and the Restless