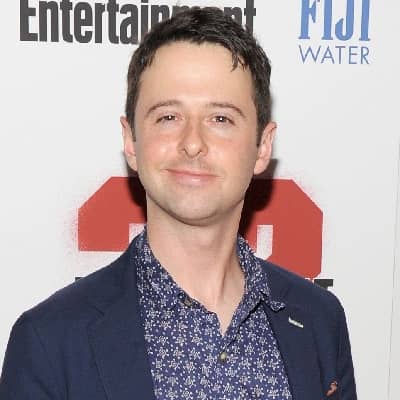 John Milhiser is openly gay and is possibly single. He hasn’t shared details about his partner or boyfriend.

He has posted several pictures on social media with comedian and roommate Nicole Byer.

Who is John Milhiser?

In SNL, he used to impersonate the style of actors like Jon Cryer, Matthew McConaughey, Verne Troyer, and Billie Joe Armstrong.

John Milhiser was born on 29 Nov 1981, in Belle Mead, Montgomery, New Jersey, US. His mother and his father’s identities are unknown.

He belongs to a Caucasian ethnic background. Regarding his academics information, he has attended Montgomery High School and then studied at Hofstra University.

He graduated from the latter in 2004 by taking Film Studies and Production as a major.

John Milhiser has appeared in both movies and TV shows. Talking about the TV appearances, he was seen on Saturday Night Live (SNL) in 2013. His contract was not renewed and he left the show after doing its 39th season.

Then he featured in a dating reality show named Are You The One? His other small-screen projects are Foursome, Gay of Thrones, Dog Walkers, Binged, and more. In shows like Adam Ruins Everything, 2 Broke Girls, Netflix Original Series Love, and Other Space, he was a guest actor.

John’s has also notable roles in movies. In 2016, he shared the screen with stars like Melissa McCarthy, Kristen Wiig, Kate McKinnon, and Leslie Jones in Ghostbusters. Then in 2019, his movie Greener Grass was released.

His other movies are Camp Takota, The Little Tin Man, The Dead Cowboy, White Powder, Rewind, The Furst, Attack, etc.

This actor has an estimated net worth of $1 million US. But details about his salary and earnings are behind the curtains.

This talented artist is doing great in his personal and professional life and is not surrounded by any scandals or rumors.

Regarding John Milhiser’s body features, he has light brown eyes and dark brown hair. His height and weight details are not known.

But he is not available on Facebook and TikTok.