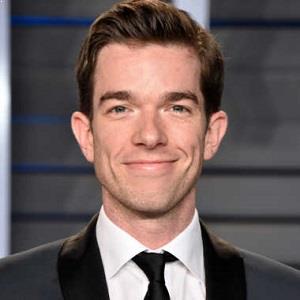 It is 100% easier not to do things than to do them, and so much fun not to do them - especially when you were supposed to do them. In terms of instant relief, canceling plans is like heroin.

The more you do stuff, the better you get at dealing with how you still fail at it a lot of the time.

I was always the squarest person in the cool room, and alternatively, sometimes the weirder person at the mainstream table.

Ill book a ticket on some garbage airline. I dont wanna name an actual airline so lets make one up, lets just call it like Delta Airlines.

John Mulaney is a married man. He is married to makeup artist Annamarie Tendler. The pair married on July 5, 2014. The wedding ceremony was performed by his friend Dan Levy. The marriage is going strong as there is no news regarding any extramarital affairs at present.

Who is John Mulaney?

John Mulaney is an American stand-up comedian, actor, producer, and writer. People mostly recognize him for his work as a writer on ‘Saturday Night Live’. Additionally, he also created and starred in  Fox sitcom ‘Mulaney’.

Mulaney was born in Chicago, Illinois on August 26, 1982, to parents Ellen, a law professor and Charles W. “Chip” Mulaney, Jr., an attorney. He became interested in the world of show business since his childhood years and he had an opportunity to audition for the role of Kevin in the film ‘Home Alone’ when he was seven years old. However, his parents declined. He is of American nationality. Furthermore, he belongs to a mixed ethnic background of Irish and German.

Mulaney was initially hired as an office assistant at Comedy Central. He auditioned for ‘Saturday Night Live’ in August 2008. He remained on the show for six seasons. Apart from his work in ‘SNL’, he has performed several stand-ups in his career. Till date, he has performed on shows including ‘Conan’, ‘Jimmy Kimmel Live’, ‘Live at Gotham’, ‘Late Night with Jimmy Fallon’ and ‘Comedy Central Presents’ among others.  He has more than 20 credits as a writer.

Some other shows and TV special that Mulaney has worked in are ‘The 75th Golden Globe Awards’, ‘Oh, Hello on Broadway’, ‘Documentary Now!’, ‘Maya & Marty’, ‘Funny as Hell’, and ‘Funny as Hell’ among others. Additionally, Mulaney also has over 25 credits as an actor. Furthermore, he has appeared in TV series including ‘Portlandia’, ‘Crashing’, ‘Big Mouth’, ‘Nothin’s Easy’, ‘Difficult People’, ‘Lady Dynamite’, ‘Kroll Show’, ‘The Soup’ and ‘Mayne Street’. He also has 11 credits as a producer.

Mulaney has won 1 Primetime Emmy Award which was in 2011 for his work on ‘Saturday Night Live’. Additionally, he has garnered the nominations for the same award other 8 times. Furthermore, he has also won WGA Award and all in all, he has 3 wins and 19 nominations to his name till date.

Mulaney has not revealed his current salary. However, he has an estimated net worth of around $ 3 million at present.

Mulaney’s controversial jokes have come to hunt his at times. Additionally, some of the sketches that he wrote in ‘SNL’ have also been criticized. At present, there are no rumors concerning his life and career.

Talking about his body measurement, Mulaney has a height of 6 feet 1 inch (1.85 m). Additionally, he weighs around 65 kg. Furthermore, his hair color is dark brown and his eye color is blue.