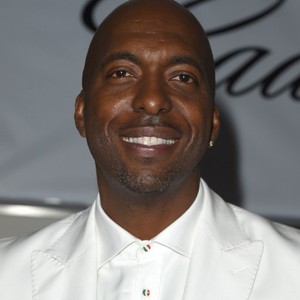 If you're a professional athlete, and after the game, you're eating at the same place that somebody in the audience is eating at? You're making a mistake

I was a vegetarian first. I had high blood pressure at 27, everybody in my family died of cancer, and I knew it was in the food, so I changed my diet

Any kind of blockage is heart disease

when you have a blood clot anywhere, that's heart disease. When Wilt Chamberlain died, strongest man I ever met in my life, I started paying attention.

John Salley is a married man since a long time. He is married to his longtime girlfriend Natasha Duffy. After years of their affair, the couple got married on 31 July 1993. The couple has two children together. His daughter’s name is Taya Salley. The names of his other child is not disclosed to the media. John and Natasha have been married for over two decades now and their relationship is still going very well. There are no other records of his past and present relationships. It seems like Natasha is the first love of his life, and he is living a happy life with his wife and children.

Who is John Salley?

John Salley is an American retired professional basketball player, actor, and talk show host. He was the first player in NBA history to play on three different championship-winning franchises, as well as the first player in the NBA to win a championship in three different decades. He played both powers forward and center for the Detroit Pistons, Miami Heat, Toronto Raptors, Chicago Bulls, Panathinaikos, and Los Angeles Lakers. He was a long-time host of the former Fox Sports Net shows The Best Damn Sports Show Period.

John Salley was born as John Thomas Salley on 16 May 1964, in Brooklyn, New York, USA. John is an American by nationality and he is of African-American ethnicity.

His mother’s name is Mazie Salley and father’s name is Quillie Salley. He is the son of African-American parents. He has three siblings named Willjay Salley, Jerry Salley, and Ron Salley.

He completed his high school at Canarsie High School. He was educated at Scheller College of Business. After that, he enrolled at Georgia Tech’s College of Management and graduated in 1988.

Salley was drafted by the Detroit Pistons in the first round of the 1986 NBA draft. In 1989 and 1990, he played on two Pistons NBA championship teams. Under the coaching of Chuck Daly, Salley was part of the Pistons era that featured three consecutive NBA finals appearances. Salley was traded to the Miami Heat in 1992 and a few years after that, he was left unprotected by Miami in the 1995 expansion draft. Following a short stint with the inaugural Toronto Raptors team where he received little playing time, he negotiated a buyout of his contract.

After that, Salley signed with the Chicago Bulls, where he played with Michael Jordan, Scottie Pippen, Toni Kukoč, and former Pistons teammates Dennis Rodman and James Edwards. He won the 1995-96 championship and retired. In 1996, Salley came out of retirement and went to play in Greece, where he joined the Greek Basket League team Panathinaikos and played seven games.

In 1999, he joined the Los Angeles Lakers. He led the Lakers to their first of three consecutive NBA championships from 2000 to 2002. In 2000, he retired again following the first Lakers championship season. Besides basketball, he has worked as a host of the former Fox Sports Net show The Best Damn Sports Show Period for a long period of time.

He has a net worth of $16 million but his salary is not revealed yet.

John has a height of 6 feet 11 inches. His body weighs 104kg. He has black hair and dark brown eyes.