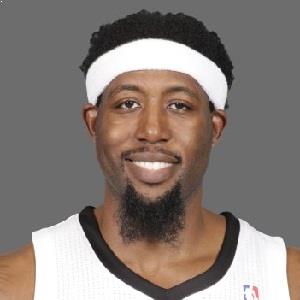 For me, it's always Christ first and playing the right way for Christ. If I do that, everything else will take care of itself. When I stay focused on that, there's no pressure to worry about

I try to leave it in Christ's hands and trust that He knows the situation. He knows the position I'm in. He wouldn't have put me in this position if I couldn't handle it. That's what keeps me going, knowing that He's right there. I can call on Him whenever

Reflecting on a personal life of John Salmons, he is a married man. He is married to his longtime girlfriend, Taniesha Salmons. The couple tied the knot on 2 September 2006.

Together, they have two children: a son and a daughter: Josiah Salmons and Saria Salmons respectively. The couple is living a blissful life with their children without any rumors of separation or an extra-marital affair.

Who is John Salmons?

Tall and handsome John Salmons is a well-known American professional basketball player. He is currently a free agent who has played for different teams from the National Basketball Association (NBA). He plays from small forward and shooting guard position.

The son of Sandra and John Salmons, John Salmons was born in Philadelphia, Pennsylvania. He was born on 12 December 1979. He is of African American ethnicity and has an American nationality.

His birth name is John Rushall Salmons. There is no information on his parents. He has a brother: Thaddeus Hayes. Since childhood, he has built up a strong interest in basketball games.

Talking about the career journey of John Salmons, he started playing basketball professionally after being selected by San Antonio Spurs in the 2002 NBA draft. He was then immediately traded to Philadelphia 76ers in exchange for Speedy Claxton.

On 13 July 2006, he was traded to Toronto Raptors but the trade was canceled because he wasn’t willing to join the Raptors. On 24 July 2006, he signed a multi-year contract with the Sacramento Kings and recorded his first triple-double with 21 points, 11 rebounds, and 10 assists against a match with Denver Nuggets. On 18 February 2009, he was traded to Chicago Bulls where he recorded an average of 18 points per game.

On 18 February 2010, he was traded to Milwaukee Bucks in exchange for Hakim Warrick and Joe Alexander. He signed a five-year contract extension with the Bucks but on 23 June 2011, he was traded back to the Kings.

John Salmons: Salary and Net Worth

His success in career path has paid him well financially making his net worth estimated to be $20 million.

Except for trade rumor, he hasn’t been in other rumor and controversy sufferings in his life.


John has a height of 6 feet 6 inches. His body weighs 94kg. He has black hair and black eyes.