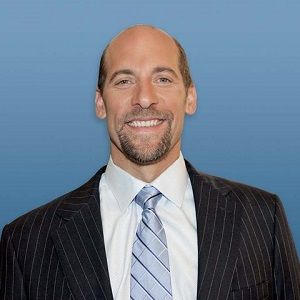 John Smoltz is a married man. At first, he married Dyan Strube. He met her at the Omni Hotel in downtown Atlanta. The couple had four children. Their children were Kelly Christina Smoltz, Rachel Elizabeth Smoltz, John Andrew Smoltz Jr., and Carly Marie Smoltz. But they divorced in the year 2007 after 16 years of their marriage.

Moreover, on many 16, 2009, he married Kathryn Darden at his home with 70 friends and family in attendance.

Who is John Smoltz?

John Smoltz is an American former baseball pitcher who is known for playing 22 seasons in Major League Baseball from 1988 to 2009, all but the last year with the Atlanta Braves. Similarly, he won the National League (NL) Cy Young Award in 1996 after posting a record of 24–8, equaling the most victories by an NL pitcher since 1972.

He was born on 15th May 1967 in Warren, Michigan. He is the son of John Adam Smoltz and Mary Smoltz. Similarly, he has a sister Bernadette Smoltz and brother Michael Smoltz.

Likewise, he belongs to American nationality and his ethnicity is mixed of Italian and German.

He is former baseball pitcher who played 22 seasons in Major League Baseball from 1988 to 2009, all but the last year with the Atlanta Braves. He was an eight-time All-Star. Similarly, he was a celebrated trio of starting pitchers who propelled Atlanta to perennial pennant contention in the 1990s.  Though predominantly known as a starter, he was converted to a reliever in the year 2001 after his recovery from Tommy John surgery.

Similarly, he spent four years as the team’s closer before returning to a starting role. In the year 2002, he set the NL record with 55 saves and became only the second pitcher in history (joining Dennis Eckersley) to record both a 20-win season and a 50-save season. Likewise, he is the only pitcher in major league history to record both 200 wins and 150 saves.

On May 1, 2008, John Smoltz indicated that he intended to return to being a relief pitcher. On August 19, 2009, he signed with the St. Louis Cardinals and made his debut against the Padres on August 23. On April 16, 2012, the Braves announced that they would retire his number 29.

After retirement, he served as a color analyst alongside Joe Simpson for Braves games on Peachtree TV. In the year 2014, he was hired by Fox Sports as a game analyst. Similarly, he was elected to the Baseball Hall of Fame in his first year of eligibility in 2015.

Likewise, in the year 2005, he was awarded the Roberto Clemente Award. In the year 2002, he was the National League Rolaids Relief Man of the Year Award winner.

The estimated net worth of John is around $60 million. Similarly, talking about his salary, he earns more than $10 million. Most of his incomes are from his playing career. In the early 2000s, he bought a house which was still under construction. In early 2012, he put his house Hall of Famer for sale for $7.2 million. After five years he dropped the price to $5,490,000.

On the year 2006, the Braves announced they had picked up his $8 million contract option for the 2007 season. The contract was extended and his salary was $14 million for 2008 season.

There is no any big rumors and controversy about John. He is successful in maintaining his life free from rumor.

John Smoltz has a height of 6 feet 3 inches and weighs around 95 kg. Similarly, his hair color is salt and pepper and he has hazel color eyes. There is no information about his other body measurements.

Jennifer Lopez: her Miami visit with her new boyfriend, her baseball talks and her upcoming music video! Know about it here!