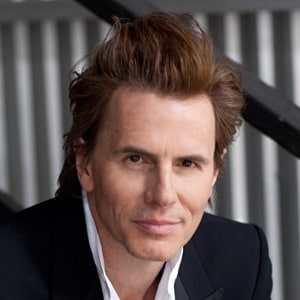 Of course we slept with the models in our videos. So did the managers, so did the director. Everybody sleeps with everybody in this game.

The speed and growth of new technology, which has been so heralded and so much fuss has been made of, has actually served to disguise how little real growth is taking place at the artistic level.

I hated being a teenager, until I discovered just how powerful the world of popular music was. It helped me find an identity and find myself. Not just the notes and beats, but the icons and the haircuts and the clothes and the liner notes. Music saved me in a way, or at least it gave me a sense of direction of how life could be.

What is the relationship of John Taylor?

John Taylor was previously in a relationship with Diana Ross, Britt Ekland, and Roberta Earl-Price. Additionally, he has also dated Tawny Kitaen and Samantha Phillips.

Furthermore, Taylor was in a relationship with Virginia Hey in 1985. In the same year, he also dated Rachel Byrd. Taylor was engaged to Danish model Renée Toft Simonsen.

Additionally, he married Amanda De Cadenet on 24 December 1991. They have a daughter, Atlanta Noo who was born on 31 March 1992.

They later separated in May 1995. His second wife Gela Nash is the co-founder of Juicy Couture. They married in Las Vegas on 27 March 1999.

Who is John Taylor?

John Taylor is an English singer, songwriter, musician, actor, and producer. People mostly know him as the bass guitarist and founding member of the band Duran Duran.

Additionally, he has also released several solo albums including ‘Feelings Are Good and Other Lies’ and ‘Meltdown’ among others.

Taylor was born Nigel John Taylor in Birmingham, United Kingdom on June 20, 1960. Throughout his childhood years, he grew up in Hollywood, Worcestershire, England.

Additionally, he was interested in the world of music since his childhood years and he learned to play piano at an early age. He is of American and English nationality.

Furthermore, there are no details available relating to his ethnic background and parents.

Talking about his education, Taylor attended Our Lady of the Wayside Catholic school as a child. Additionally, he also attended Abbey High School.

Furthermore, he attended the School of Foundation Studies & Experimental Workshop at Birmingham Polytechnic which is currently Birmingham City University.

Taylor played guitar for the band. Later, he switched to bass guitar. The band released its first album in 1981 and soon received widespread fame.

Coming to his solo career, Taylor co-founded the independent record label B5 Records in 1996.

He has released albums including ‘I Do What I Do’, ‘Autodidact’, ‘Résumé’, ‘The Japan Album’, ‘Live Cuts’, ‘Techno for Two’, and ‘MetaFour’ among others.

In addition, Taylor also has also appeared in movies and television series including ‘Ginormous Food’, ‘Samantha Who?’, ‘That ’80s Show’, ‘Strange Frequency’, ‘The Flintstones in Viva Rock Vegas, ‘Timeslip’, ‘Miami Vice’, and ‘Drowning on Dry Land’ among others.

Taylor has not revealed his current salary. However, he has an estimated net worth of around $30 million as of 2022.

Taylor has been part of several controversies in his career due to his history of substance abuse. He is sober at present. Currently, there are no rumors concerning his life and career.

Talking about his body measurement, John Taylor has a height of 6 feet 2 inches (1.88 m).

Additionally, his hair color is dark brown and his eye color is blue.

Taylor is active on Twitter. He has over 70k followers and has tweeted more than 6k times. However, he is not active on Facebook and Instagram at present.