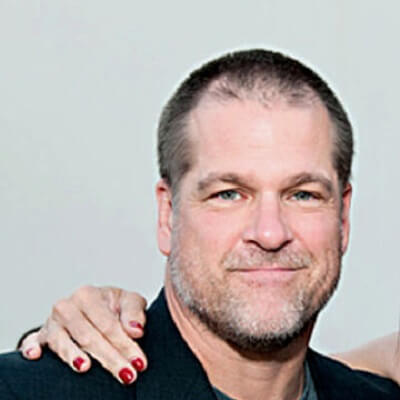 John Terlesky is a married man. He is married to actress Jayne Brook. His wife, Jayne is an American actress, best known for her role as Dr. Diane Grad on Chicago Hope. She is also known for her recurring role as Starfleet Vice Admiral Katrina Cornwell in Star Trek: Discovery.

The couple exchanged wedding vows on May 11, 1996, in a private ceremony with close friends and family. The couple has now been married for around 24 years.

From their marriage, the couple has two children. Brook gave birth to their first daughter, Alexandra Terlesky in 1998. Their second daughter’s name is Annaliese Marie Terlesky.

There is no information about her past affairs and relationships.

Who is John Terlesky?

John Terlesky is an American actor, director, and screenwriter. He is best known for his work in Guardian (2001), The Pandora Project (1998), and Deathstalker II (1987).

John Terlesky was born as John Todd Terlesky in Cincinnati, Ohio, on May 30, 1961. As of 2020, his age is 58. He is also known as Jon Terlesky and J. T. Terlesky. There is no information about his parents. Similarly, he has not revealed anything about his siblings and other family members. He spent his childhood days in Cincinnati, Ohio.

Talking about his education, he went to Wyoming High School and graduated from there.

John Terlesky entered the entertainment industry in the mid-80s. His debut TV role came in the NBC drama, ‘Legmen’. Some of his other notable TV shows include V, The Facts of Life, Our House, Walker, Empty Nest, Texas Ranger, Guns of Paradise, and The Last Frontier. In 2005, he appeared as Larry Van Owen in an episode of CSI: Miami.

His debut movie role came in 1985’s Secret Admirer. Following that, he made appearances in a number of 80s movies including The Naked Cage, Valet Girls,  Chopping Mall, The Allnighter, Deathstalker II, Damned River, Appointment with Death, and Crazy People. The 2003 movie, Written in Blood remains his last movie credit.

His best-known role came in 1987 with the movie Deathstalker II in which he portrayed the titular character. The Argentine-American fantasy adventure is a sequel to the 1983 movie, Deathstalker. It starred John and Monique Gabrielle.

After gaining experience as an actor, he decided to try his hand in movie directing. In 1998, he directed his first film, ‘The Pandora Project’. Following that, he directed numerous TV films. From 2006, he started directing episodes of some very popular TV series.

Some of his directorial credits include episodes of Grey’s Anatomy, Boston Legal, Ugly Betty, Drop Dead Diva, Army Wives, Human Target, Body of Proof, Castle, Agents of S.H.I.E.L.D., Gossip Girl, and How To Get Away With Murder.

His recent projects include The Blacklist, Castle, Timeless, The Rookie, etc.

How much is John Terlesky worth?

John stands at a height of around 5 feet 9 inches. He weighs around 85 kg. His hair color is dark brown and his eyes are blue in color.

The actor has not been involved in any controversies. He has been able to keep himself away from any type of controversy and scandal. So far, he has not done anything controversial in his acting career. Similarly, there are no rumors about him of any kind.

You may also like to read the Bio, Career, Body Measurements, Net Worth, Social Media, Relationships, and more about Jack Davenport, Jayne Brook, Nick Cordero, and more.