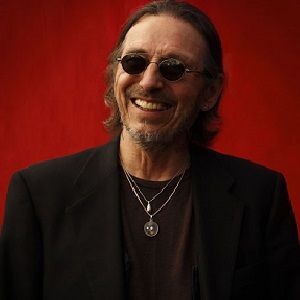 This new God, and all God's children, God didn't have a lot then but they were very mean so their numbers expanded through terror, but God's children were their job and the objective was to subdue the earth for this God. So in order to achieve that objective, they had to create sexism. See, sexism has got to do with how we live with the earth and racism because now the earth was property, you know, and all spiritual value was away. It was away from the earth. The real spiritual value was now a religious perceptional thing and so it wasn't all-encompassing. It wasn't just a part of the reality anymore.

Don't trust anyone who isn't angry.

Every human being is a raindrop. And when enough of the raindrops become clear and coherent they then become the power of the storm.

In 1968, Trudell was married to Fenicia “Lou” Ordonez. But they separated after some time. Again in 1972, Trudell married Tina Manning, an activist of the Duckwater Shoshone Tribe. They have three children together: Ricarda Star, Sunshine Karma, and Eli Changing Sun. In February 1979, Tina (who was pregnant) and his children along with this mother were killed in a fire at her parents’ house.

Then he was in a relationship with Marcheline Bertrand, the mother of actress Angelina Jolie. They were dating each other before her death from cancer in 2007.

Who is John Trudell?

John Trudell was one of the popular American author, poet, actor, musician, and political activist. In early 1969, he worked as the spokesperson for the United Indians of All Tribes’ takeover of Alcatraz. He also worked as the National Chairman of the American Indian Movement, in Minneapolis, Minnesota during 1970.

There were drastic changes in his life when his pregnant wife, three children, and mother-in-law were killed in 1979 in a suspicious fire at the home of his parents-in-law on the Shoshone-Paiute Tribes Duck Valley Indian Reservation in Nevada. After that, Trudell started his career towards writing, music and in the film industry. The documentary film titled Trudell is made about him and his life as an activist and artist.

John was born on 15 February 1946, in Omaha, Nebraska. His father, Clifford Trudell is Santee Dakota. Likewise, his mother’s name is Ricarda Almanza who is a Mexican. There is no information on his siblings. He grew up in the small towns near the Santee Sioux Reservation in northern Nebraska near the southeast corner of South Dakota.

Talking about the educational background of John, he studies at the local school. Later, he graduated from San Bernardino Valley College.

John started his career as a political activist. He used to work as the spokesperson for the United Indians of All Tribes’ takeover of Alcatraz beginning in 1969. He became the National Chairman involving in the American Indian Movement from 1973 to 1979. He also falls under different Political controversy through had a good career in it.

But a great turnover came to his life when his pregnant wife, three children, and mother-in-law were killed in 1979 in a fire at the home on the Shoshone-Paiute Tribes Duck Valley Indian Reservation in Nevada. Then he entered in the field of music and film. He acted in three films in the 1990s.

John no sooner built his career as an actor. He appeared in different great movies performing outstanding roles in “Pow Wow Highway” in 1989, likewise in Thunderheart which releases in 1992. His performances in On Deadly Ground (1995) and Smoke Signals (1998) were also good that uplift his career.

Moreover, he is also popular for playing as Peltier in Thunderheart and as Coyote in a story about A Spider and Coyote. The documentary film named Trudell holds the story about him and his life as an activist and artist. And he has also appeared in various other movies.

He also has a good career in writing as he has written many poems, including “Baby Boom Che” and “Rant and Roll,” and hundreds of others. Six months after the deaths of his family members, he started writing poetry. Trudell’s poems were so good that his poetry gets uses as lyrics for recordings.

Then in 1988, one of the Australian rock band named Midnight Oil invited Trudell. Working with them he also earned a lot of fame. Then he was featured in the various albums. He has built a great career and his professional life.

In 2008, Trudell penned a book Lines From a Mined Mind: The Words of John Trudell, which made a collection of 25 years of poetry, lyrics, and essays.

John Trudell: Awards and the Net worth

He has built the great career and has various of the great contribution. But he didn’t receive any awards. His net worth is $18 million. And his salary is also unknown.

He seems to have a good professional and personal life with everyone. So he never falls under such rumors and controversies.

The height and weight of John are unknown. Looking at his body appearance he seems to have a well-built body. The actor has black colored eyes and light brown colored hair.

In early December 2015, it Trudell was in the last stages of terminal cancer. And after that different prematurely death of him was announced on the evening of December 4, 2015. No sooner his publicist takes a step asking for a retraction. Then the stories were removed from the websites where they had been posted. No sooner Trudell died on December 8, 2015.

Also get to know about the biography of Crispin Glover, Kristine Froseth, Michael Clifford.