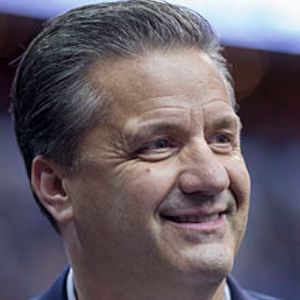 A successful person never loses...they either win or learn

You've gotta learn to love the grind. Because life IS the grind.

What is the relationship of John Vincent Calipari?

John Vincent Calipari is a family man. He met his wife Ellen at Kansas where she worked as a secretary and John Calipari had just joined as an assistant basketball coach. After dating her for nearly 3 years, he married her on 22nd June 1986.

He shares a lovely relationship with her; he is in the spotlight while she is quiet and shy. Both complement each other and the theory that ‘opposites attract’ holds true in their case. They have 3 children-2 daughters and 1 son. The elder daughter is called Erin Calipari and was born on 17th February 1986. She completed her doctorate in Neuropharmacology from Wake Forest and got married in November 2014. Their second daughter Megan was born on 23rd November 1989 and has done graduation from Cambridge School of Culinary Arts and is now working as a professional French pastry chef.

Later, his son Bradley Calipari was born on 11th November 1997. He is studying at the University of Kentucky and is a budding basketball player. John Calipari’s mother died in 2010 due to cancer. He would get his father for his matches in order to help him overcome the solitude due to his wife’s death after 54 years of togetherness.

Who is John Vincent Calipari?

John Calipari is an extremely well-known American college basketball coach. He has worked with Kansas Jayhawks, Pittsburg Panthers, University of Massachusetts Minutemen, Brooklyn Nets, Philadelphia 76ers, Memphis Tigers, and now since 2009 he is with the University of Kentucky Wildcats.

John Calipari was born on February 10, 1959, in  Moon, Pennsylvania, United States. His nationality is American and his ethnicity is Italian.

He was born to Vince Calipari(father) and Donna Mae Calipari(mother). He has 2 siblings both sisters namely Terri Calipari and Lea Calipari. Terri owns a frozen yogurt shop in Florence.

He was starting point guard for Clarion State Eagles. John has also played for UNC-Wilmington from 1978-80. He used to write motivational quotes and stick them on his dorm’s wall. He knew the art of earning money and had once purchased a trailer and rented it to earn for his college fees.

John Calipari was a good basketball player but he was the most mature and understanding amongst his teammates. He had great teaching skills. He first joined as an assistant coach at Kansas, and later switched to Pittsburg in 1986. In just 3 years, he became head coach in Massachusetts. This was followed by heading basketball training at New Jersey, Philadelphia, Memphis, and in 2009 at the University of Kentucky.

John Vincent Calipari is a great coach who inspires his students. He is a great talent evaluator and the majority of his trainees have made it to the NBA draft. John has the capability to help people achieve their dream and has got several honors. He is a Naismith Memorial Basketball Hall of Famer.

As per the sources, this coach has a net worth of $45 million as of 2022, but his exact salary is not estimated yet.

John Calipari is a wonderful basketball coach who can discern hidden talent and bring it to the forefront. He motivates and guides his student players and refines and polishes their moves and techniques. Controversies are not uncommon with fame. He had invited trouble when he abused Star-Ledger sports reporter Dan Garcia and called him a ‘Mexican idiot’ and was sued for $ 5000000. The case was dismissed after John Calipari apologized for his comments.

But he had to cough up $ 25000 to NBA as a penalty. It was rumored that in 2011, he had tried to reach an out-of-court settlement for a sum of $ 100000 with the three attorneys who represented the Memphis season ticket holders and wanted to file a suit about the vacated Memphis 2007-2008 season due to the fraudulence and misconduct of Derrick Rose at the entrance examination.

His 500th career win as a Division I men’s basketball coach had been exaggerated and hence his victory was said to have occurred only on March 15, 2012, and not on February 26, 2011, as previously stated. In February 2017 there were rumors that he would be leaving Kentucky University. But he denied this and said that he will stay there for another 4-5 years since his son is studying at the University. He is also known to squabble with his fellow coaches. His ‘one-and-done’ system is also heavily criticized.

John Vincent Calipari has a height of 6 feet 2 inches. He dark brown eyes and salt-pepper hair. Currently, his body weight is not known. Also, there are no further details regarding his body measurements.

John Calipari-a great basketball coach in the making, his family ties and his controversies: Read about all here!