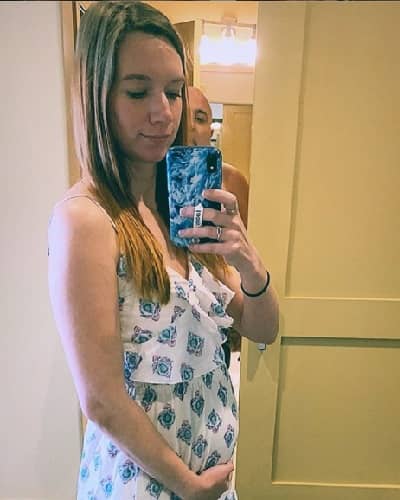 Johnna Colbry and Duff Goldman announced in August 2020 that they are expecting their first child together. Johnna has been giving updates on her pregnancy through Instagram. On 8th August 2020, she shared a picture of her and her husband Duff holding a tiny muffin and she captioned it,

Their wedding was attended by 250 guests including close friends and family. Nine months before their wedding, Duff proposed to Johnna by improvising a ring with butcher’s twine.

He and his pastry crew created many different types of desserts. They had an underwater-themed cake decorated with bubbles and leafy sea dragons that were hanging from the ceiling.

“I don’t know how Johnna feels about me likening her to a leafy sea dragon but they are beautiful and graceful and they’re gentle and they’re sweet and so is Johnna.”

Similarly, they served a traditional white wedding cake as well as tiered meat cake layered with meatballs, meatloaf, lamb shawarma, and scrapple. They went to Thailand for their honeymoon.

Johnna Colbry was born on 15th September 1993 in the United States. She is 27 years old at present. She is the daughter of Rebecca Yoshihara. Her mother is an Orange County, California native. She attended the Tulsa School of Arts and Sciences and graduated in the year 2011.

When she was in high school, she took part in musical theatre, choir, jazz band, orchestra, OYO club, and after school reading with ESL Elementary Children. After that, in the year 2013, she attended Santa Monica College and studied Film/Cinema/Video Studies.

How much is the net worth of Johnna Colbry?

Johnna Colbry has an estimated net worth of $1 million. She was an assistant manager at GREATS. Previously, she was lead sales at Roots. She used to count the cash drawer and managed deposits. Similarly, she helped with custom leather orders and repairs.

Also, she worked as a host trainer for Rusty’s Surf Ranch where she kept an up to date floor chart of the seating arrangements and worked with servers to promote a positive environment for customers and employees.

He has appeared in Food Network Challenge, Iron Chef America, Oprah, The Tonight Show With Jay Leno, and Man vs Food. He has featured his work and his shop on the reality television show Ace of Cakes. Read more bio…