Johnny Cash was an American singer, songwriter, musician, and actor. His music contained themes of sorrow, moral tribulation, and redemption. 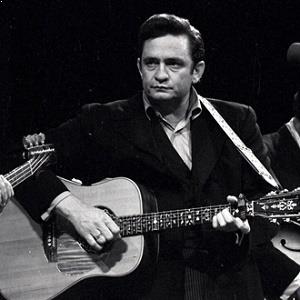 I did not vote for Mr. Bush [President George W. Bush]. Let's leave it at that.

I learn from my mistakes. It's a very painful way to learn, but without pain, the old saying is, there's no gain.

Johnny Cash had been married twice in his lifetime. Previously, he married Vivian Liberto. They first met at a roller skating rink in San Antonia and started date before he was deployed to Germany while he was in military service.

They used to be in contact through letters and during that time they have exchanged more than a hundred letters. The couple married on August 7, 1954, at St. Ann’s Roman Catholic Church. They were blessed with four daughters, Rosanne, Kathy, Cindy, and Tara.

Due to his addiction to drugs and alcohol as well as his constant touring and affairs with other women their married relationship came to end. They got divorced in 1966. He was also in a relationship with Billie Jean Jones.

Then he married June Carter on 1st March 1968 in Franklin, Kentucky. The couple met on a tour and they both became infatuated seeing each other. After 13 years Cash proposed Carter during a live performance in London, Ontario.

They were blessed with one son, John Carter Cash on 3rd March 1970. After the death of his wife June Carter on 15 May 2003, Cash also died four months later.

Who is Johnny Cash?

Multi-talented Johnny Cash is an American singer, songwriter, guitarist, actor, and author. Johnny Cash was one of the best-selling music artists of all time and has sold more than 90 million records worldwide.

He is mostly known for songs such as ‘I walk the line’, ‘Folsom Prison Blues, ‘Man in Black’, and ‘Get Rhythm’.

On September 12, 2003, Cash passed away due to Diabetes mellitus at Baptist Hospital in Nashville. He was 71 years old.

He was born John R. Cash in Kingsland, Arkansas on February 26, 1932. He was born as one of the seven children to Ray Cash and Carrie Clover.

He was of mixed (Scottish and English) ethnicity and has American nationality.

At the age of 5, he started working with a family in a cotton field while singing together with family members. At the age of 12, he began writing a song and he was taught how to play guitar by his mother and friend.

He was influenced by Dennis Day, who’s the song he used to hear on the Jack Benny radio program.

Cash started his career journey as United States Air Force on July 7, 1950. Cash was assigned to the 12th Radio Squadron Mobile of the U.S Air Force Security Service as a Morse code operator intercepting Soviet Army transmissions. He has a scar on his face due to surgery to remove a cyst and he was discharged as a staff sergeant on July 3, 1954.

After his military service, Cash released the song ‘Hey Porter’ and ‘Cry! Cry! Cry!’ which gained a huge success.

Cash has also sung with Elvis Presley and Kris Kristofferson. He got into fame so rapidly with the hit song and albums he released. Soon his all schedule was pack touring and singing all around the nations. He even performed a concert at prisons and his first prison concert was at San Quentin State Prison on 1st January 1950.

Cash has started his own ABC network television show ‘The Johnny Cash Show’ in 1969 but ended in 1971. He started singing and touring all again winning uncountable awards and fan followers.

Johnny Cash was also an author who has published ‘Man In Black’, ‘Men In White’, Cash: The Autobiography, and much more. His success in his career has paid him well successfully making him own an estimated net worth of $120 million.

Johnny Cash was once rumored that Philips made a comment on him to go and sin which Cash denied.

Johnny Cash had an average body type with dark brown eyes and black hair. Besides, he had an average height that is 6 ft 2 inches and a weight of 86.2kg.

Also get to know more about Dave Mustaine, Johnny Cash, and Marilyn Manson.