Johnny Depp is one of the popular American actors, producers, and musicians.

Johnny Depp married Lori Anne Allison on December 20, 1983. The couple divorced in 1985. Later, he engaged with actors like Jennifer Grey and Sherilyn Fenn in the late 1980s.

After that, Depp started to like his co-star Winona Ryder and also proposed to her in 1990.  He was so much in love with her that he has tattooed “WINONA FOREVER” on his right arm. But it doesn’t last long.

He has a relationship with Kate Moss, an English supermodel in 1994. They were together until 1998 but were separated.

Depp started a relationship with the French actor, Vanessa Paradis following his breakup with Moss. The couple first met while filming The Ninth Gate in France in 1998. They also have two children; a daughter named Lily-Rose Melody Depp and a son named John “Jack” Christopher Depp III. Depp and Paradis announced their separation in June 2012.

Later, he started dating Amber Heard, whom he met on the set of The Rum Diary in 2011. The couple exchanged vows in February 2015.

Their wedding ceremony was held at their home in Los Angeles. Heard filed for divorce on May 23, 2016. 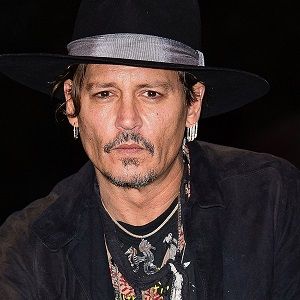 People say I make strange choices, but they're not strange for me. My sickness is that I'm fascinated by human behavior, by what's underneath the surface, by the worlds inside people

I'm an old-fashioned guy... I want to be an old man with a beer belly sitting on a porch, looking at a lake or something

I am doing things that are true to me. The only thing I have a problem with is being labeled.

Who is Johnny Depp?

Johnny Depp is one of the most popular American actors, producers, and musicians. He has various outstanding works and has been nominated for three Academy Awards.

The actor is also the winner of the Golden Globe and Screen Actors Guild Awards for Best Actor. He is well known for playing the role of Jack Sparrow in the blockbuster movie, Pirates of the Caribbean. In 2012, ‘Guinness World Records’ also listed Depp as the highest-paid actor.

His ethnicity is Mixed(English, Irish, Scottish, Welsh, French, Canadian, Dutch, Flemish Belgian, German, and African) while his nationality is American.

The youngest of the four children he was self-aspired towards music as seen performing it in the family. His father’s name is John Christopher Depp he worked as a civil engineer.

Likewise, his mother’s name is Betty Sue Palmer who is a waitress and a homemaker.

His parents divorced in 1978 when he was fifteen years old. Later, his mother married Robert Palmer. Deep says that Robert is an inspiration to him.

He has had the personality of a superstar since his early childhood and was a must interest in acting and performing in different programs.

On his 12th birthday, his mother gifted him a guitar. When he received it, he dreamt of becoming a musician.

Johnny Depp’s first acting role was playing as the boyfriend of the lead character in ‘A Nightmare on Elm Street‘ in 1984.

He no sooner got the chance to act in another movie. He played the role of Donnie Fleischer in a TV movie called Slow Burn in the year 1986.

The performance he gave there was loved by all and it was able to win millions of hearts all over the world.

Not that he has only built his career as an actor, but he also provides his voice to many characters in TV shows and movies. He has given his voice in a movie, Corpse Bride One for the character Victor Van Dort in 2005.

His role as Captain Jack Sparrow in the movie Pirates of the Caribbean is one of his best works. It will always remain one of the best portrayals ever.

Moreover, he has done other various great movies and TV shows including Tusk, 21 Jump Street, Into the Woods, The Lone Ranger, Jack and Jill, King of the Hill, and Family Guy.

In 2016, he played the role of the current POTUS Donald Trump in the parody movie The Art of the Deal: The Movie, based on the book of the same name published by Donald Trump.

In 2017, he reprised the role of Captain Jack Sparr/ow in the fifth installment of the Pirates of the Caribbean film series.

Depp is also engaged with various films that will release in 2018.

Johnny Depp’s first major award was the ‘London Film Critics’ Circle Award’ for ‘Actor of the Year, which he received in 1995 for his roles in ‘Don Juan DeMarco and ‘Ed Wood’.
The versatile actor was awarded an honorary ‘César’, France’s national film award, in 1999. In 2008, Depp receives a ‘Golden Globe Award for Best Actor in Motion Picture’.
He also received the title ‘Best Villain’ at the ‘MTV Movie Awards. The actor continuously won the People’s Choice Awards for Favorite Movie Actor on three occasions from 2011 to 2014.
Deep received different Teen Choice and Kids’ Choice awards throughout his career.
He was awarded the ‘MTV Generation Award’ in 2012. ‘Guinness World Records has also listed Depp as the highest-paid actor in the year 2012.

Johnny Depp: Salary and Net Worth

Depp has earned a massive amount of salary from his acting career. His average salary per year is approximately $50 million and his salary per film averages $20 million.

As of 2022, Depp’s current net worth is $400 million. While a portion of his annual income comes from investments such as his winery, Production Company and various real estate holdings, the bulk of his earnings come from his movies.

He has a lavish car manufactured by Chevrolet Corvette, which cost $64,900.

He is engaged in different kinds of rumors. It was rumored that Depp was going through a “midlife crisis.”

After posting the photos of the actor-musician looking thinner than in his real life. The photo received criticism online. It was said that his health has been greatly exaggerated.

Likewise, it was also rumored that Depp was quitting Hollywood Vampires. But the show cleared it out that Depp was too in the show. In September, Star spread more falsehoods when it claimed Depp was dating Angelina Jolie. Indeed, just a few months later it was revealed Jolie hadn’t dated anyone since her split from Brad Pitt.

His foot size is 10 US (45 EU). He has hazel-colored eyes and brown-colored hair.