Johnny Gill is an American singer-songwriter and actor. Gill is a member of New Edition. He has one child.

Johnny Gill is in a relationship. He dated Canadian-born actress Jillian Barberieback in 2003 and he is said to have also been involved with an R&B singer, Stacy Lattisaw.

Gill is also said to have hooked up with actress Sherri Shepherd back in 2014 but the fate of that relationship is uncertain. He has also been linked with the international model and actress Carissa Rosario in recent times. One thing is certain, this music star is definitely not in lack of dating options.

Apart from this, Gill also has a son. His son Isaiah was born back in 2006. The music star has opted to keep the identity of the baby’s mother away from the public but he has revealed that they are both getting on well in their co-parenting duties. 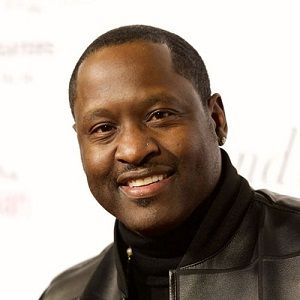 Who is Johnny Gill?

Johnny Gill is an American musician, singer, songwriter, record producer, and actor. He is also known as “JG,” “Johnny G,” and “J Skillz.”

Likely, he is the sixth and final member of the R&B/pop group New Edition and was also a member of the supergroup called LSG, with Gerald Levert and Keith Sweat.

Johnny Gill was born in Washington, D.C., the United States on May 22, 1966. His birth name is Johnny Gill Jr. and he is currently 54 years old.

His father’s name is  Johnny Gill Sr. (Baptist minister) and his mother’s name is Annie Mae Gill. He started singing at the age of five singing along in church in a family gospel group called Little Johnny and “Wings of Faith”.

Gill planned to attend college to pursue a degree in electrical engineering but decided instead to focus on his singing career.

Talking about his profession, in 1982, singer Stacy Lattisaw, who was his childhood friend and who had heard Gill perform in his family group, persuaded him to record a demo. The president of ‘Atlantic Records’ heard the demo and liked it. Thus, Gill recorded his first album at the age of 16.

The debut album, titled ‘Johnny Gill,’ was released by ‘Cotillion Records,’ a subsidiary of ‘Atlantic Records.’ His first single, ‘Super Love,’ made its place among the top 30 singles on the ‘R&B Hit’ chart. His next project was a duet album with Stacy Lattisaw, titled ‘Perfect Combination.’

It graced the ‘Billboard 200’ and brought him national attention and fame. He recorded his second solo album, ‘Chemistry,’ in 1985, but it failed to achieve much commercial success. Gill’s music career received a boost when, in 1987, he joined ‘New Edition’ as their lead singer.

The group was a popular boy band of the 1980s, with all of its members, except Gill, being from Boston. Michael Bivins was responsible for making Gill join the band. Gill was an apt replacement for Bobby Brown. The group released their album ‘Heart Break’ in 1987, and a single from the album, ‘Can You Stand The Rain,’ reached the number one spot on the R&B charts.

He then released ‘Let’s Get the Mood Right’ in 1996. Both these albums earned the “gold” certification from the ‘Recording Industry Association of America’ (RIAA). He reunited with the band ‘New Edition,’ and together, they released an album, ‘Home Again,’ in 1996. Along with Gerald Levert and Keith Sweat, Gill formed the supergroup ‘LSG’ (Levert/Sweat/Gill).

Their debut album, ‘Levert.Sweat.Gill’ was a hit and achieved the “double-platinum” status. Their last album, ‘LSG2,’ released in 2003, was also a hit. During 2008, he formed a group with his previous ‘New Edition’ bandmates Bobby Brown and Ralph Tresvant. A few songs from the album, such as ‘Behind Closed Door’ and ‘Game Changer,’ went on to become R&B radio hits.

Gill appeared as a singer and an actor on a number of TV shows and in a few movies, too. In the film ‘Madea’s Family Reunion’ (2006), he rendered the song ‘You For Me.’ He appeared in a cameo role on the TV show ‘Family Matters.’ He also performed in various episodes of the TV series ‘Soul Train,’ from 1988 to 2004.

Additionally, he won Outstanding TV Movie/Limited Series for The New Edition Story (2017) at Black Reel Awards. In addition, he won Best R&B/Urban Contemporary Album of the Year – Male at the Soul Train Award.

He has an estimated net worth of around $12 million as of 2022, which he has earned from his professional career.

There was a rumor of being gay and also in a long term relationship with Hollywood titan Eddie Murphy. Currently, he is far from rumors and controversies.

Johnny Gill has a height of 6 feet 1 inch. Additionally, he weighs is 80Kg. His hair color is black and his eye color is dark brown.

Also, read the affair, salary, the net worth, controversy, and the bio of Billy Corgan, Jimi Westbrook, and James Iha.