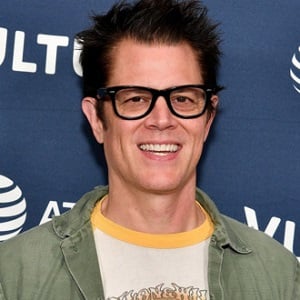 People think by challenging me they're going to show they're tough. But I'm not tough. Decent drinker. Not such a bad kisser. But not a great fighter.

It's a real primal thing, watching someone get hurt. It's funny and accessible.

I just love that spirit that makes people do things that they probably shouldn't.

You can tell it's good if you light it and a blue flame comes up, that means it's good moonshine and it won't make you go blind.

Bo and Luke are essentially good guys. They're just reckless as all hell. Mean as snakes, but in a good way.

What is the relationship of Johnny Knoxville?

Johnny Knoxville was previously married to Melanie Lynn Cates. The pair married on May 15, 1995. They have a daughter, Madison together. They later separated in July 2006 and their divorce was settled in July 2009.

Johnny is currently a married man. He is married to Naomi Nelson. The couple exchanged vows on 24 September 2010.

They have a daughter from this relationship, Arlo Lemoyne Yoko Clapp who was born on October 6, 2011, and a son, Rocko Akira Clapp. Knoxville’s marriage is going strong as there is no news regarding any extramarital affairs at present.

Who is Johnny Knoxville?

Johnny Knoxville is an American actor, comedian, film producer, screenwriter, and stunt performer. People mostly know him as a co-creator and star of the MTV reality stunt show ‘Jackass’.

Additionally, he has appeared in several other movies like ‘Men in Black II’, ‘The Ringer’, and ‘The Dukes of Hazzard’ among others.

Knoxville was born Philip John Clapp in Knoxville, Tennessee on March 11, 1971. He was born to parents Philip and Lemoyne Clapp. His mother was a tire/car salesman and his father taught Sunday school.

He developed a keen interest in acting in his childhood years. He is of American nationality. Furthermore, he belongs to a mixed ethnic background of English, German, Scots-Irish/Northern Irish, Irish, French, and Dutch.

Talking about his education, Knoxville attended South Young High School and graduated in 1989.

Johnny Knoxville moved to California to become an actor after his graduation. Initially, he appeared in several commercials. In 1992, he appeared as Cure Fan in the TV series ‘The Ben Stiller Show. Additionally, he also had roles in ‘Desert Blues’ and ‘Coyote Ugly’.

Some other movies and television series that Knoxville has appeared in are ‘Animals.’, ‘Rosy’, ‘Drunk History, ‘Action Point’, ‘Half Magic’, ‘Weightless’, ‘Skiptrace’, ‘Elvis & Nixon’, ‘Funny or Die Presents…’, ‘Maron’, ‘Bad Grandpa’, ‘The Last Stand’, ‘Nature Calls’, ‘Small Apartments’, ‘Dudesons in America’, ‘Father of Invention’, ‘The Goode Family’, ‘King of the Hill’, ‘Unhitched’, ‘The Preston Lacy Show’, and ‘Daltry Calhoun’ among others. Additionally, Knoxville also has more than 10 credits as a writer and over 20 credits as a producer.

Knoxville has not revealed his current salary. However, he has an estimated net worth of around $90 million as of 2022.

Knoxville’s show ‘Jackass’ attracted numerous controversies along its way for several years. Some of their stunts are outrageous and are often criticized. At present, there are no rumors concerning his life and career.

Talking about his body measurement, Johnny Knoxville has a height of 6 feet 1 inch (1.85 m). Additionally, he weighs around 77 kg.