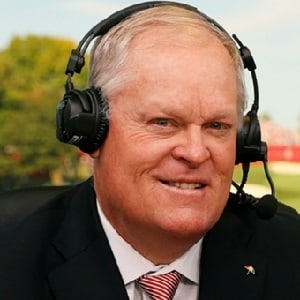 Johnny Miller is a married man. He is married to Linda Miller. Details about their wedding are not disclosed.

Miller’s marriage is going strong as there is no news regarding any extramarital affairs at present.

Who is Johnny Miller?

Johnny Miller is an American former professional golfer. In 1974 and 1975, he was ranked second in the world on Mark McCormack’s world golf rankings.

He was working as the lead golf analyst for NBC Sports since January 1990. Recently, he announced that he will retire from the channel after one more event.

Miller was born as John Laurence Miller in San Francisco, California on April 29, 1947. He was born to parents Larry Otto Miller and Ida Meldrum.

In addition, he developed a keen interest in the world of golf since his childhood years. He is of American nationality. Furthermore, there are no details available about his ethnic background at present.

Talking about his education, Miller attended Abraham Lincoln High School and graduated in 1965. Additionally, he enrolled at Brigham Young University in Provo.

Eventually, he graduated with a degree in physical education.

Johnny Miller went to the Olympic Club in 1963 as a Junior Golf Section member. Additionally, in 1963, he won the San Francisco city junior title. He qualified for the 1966 U.S. Open at the Olympic Club. At the age of 22, Miller joined the PGA Tour in 1969.

Furthermore, Miller owns a golf design company and a golf academy. Additionally, as an actor, he has also appeared in ‘The Associate’ and ‘Mr. Wrong’. He has made appearances in shows like ‘Mike & Mike’, ‘Pardon the Interruption’, ‘Real Sports with Bryant Gumbel’, ‘Tin Cup’, and ‘The Mike Douglas Show’. In 1998, his name was inducted into the World Golf Hall of Fame.

Miller has not revealed his current salary. However, he has an estimated net worth of around $20 million at present.

Several of Miller’s comments as a golf analyst has been criticized over the years. His feud with Ian Poulter made news as a controversial fire back. At present, there are no rumors concerning Miller’s life and career.

Talking about his body measurement, Johnny Miller has a height of 6 ft 2 inches. Additionally, he weighs around 93 kg.

Furthermore, his hair color is blonde/grey and his eye color is dark brown.

Miller is not active over social media. He does not have his official Twitter and Instagram accounts. Additionally, he is not active on Facebook as well.