Johnny Weir is possibly single. He has come out as openly gay. On 30 December 2011, he got married to Victor Voronov. He is a Georgetown Law graduate of Russian Jewish descent.

The couple got divorced in 2015. The reason for her divorce was due to domestic difficulties. Previously, he was also in a relationship with Adam Lambert in 2010. 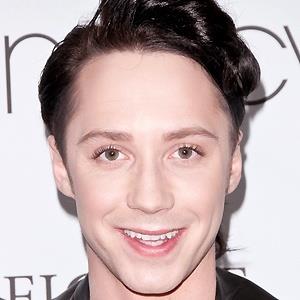 Love myself I do. Not everything, but I love the good as well as the bad. I love my crazy lifestyle, and I love my hard discipline. I love my freedom of speech and the way my eyes get dark when I'm tired. I love that I have learned to trust people with my heart, even if it will get broken. I am proud of everything that I am and will become.

I'm not ashamed to be me. More than anyone else I know, I love my life and accept myself. What's wrong with being unique? I am proud of everything that I am and will become.

I grew my beard out a little bit just to show that, indeed, I am a man.

Who is Johnny Weir?

Johnny Weir is an American former figure skater. Johnny Weir began skating since 1996 and he retired in 2013. He rose to fame becoming the three-time U.S. national skate champion.

In addition, he has also won the bronze medal at the 2008 World Championships in the men’s singles competition. He has also started his own show Be Good Johnny Weir.

The son of John and Patti Weir (father), Johnny Weir (mother) was born in Coatesville, Pennsylvania. He was born on 2 July 1984 and named John Garvin Weir.

He is of Norwegian ethnicity and has an American nationality. Weir grew up with his four-year-old younger brother Brian.

In his childhood, he was a successful equestrian, competing with his pony, My Blue Shadow, an Arabian-Shetland cross. He has also developed a strong interest in skating which is the reason why his family moved to Newark, Delaware so that he could train.

He gave up equestrian because his family couldn’t afford to support his both dream.

Talking about the career journey of Johnny Weir, he began his skating career since 1996 and he retired in 2013. He became influenced by watching Oksana Baiul win her 1994 Olympic gold medal and he started skating since he was 11.

In 2001, he won the gold medal at the World Junior Championships at the age of 16. In the same year, he also ranked the sixth position in his debut at the senior U.S. Championships.

He withdrew from the 2003 U.S. Championships competition due to his knee injury caused by hitting the wall during his long program. During the 2003-2004 season, he became qualified for U.S. Nationals by winning his regional and sectional championships.

He won the gold medal over Michael Weiss and Matthew Savoie at the 2004 U.S. Championships. Similarly, he also competed at the World Championships and he was ranked fifth.

During the 2004-2005 season, he won his first two Grand Prix titles. In addition, he also became first at the 2004 NHK Trophy in Japan and second at 2004 Trophée Eric Bompard in France.

Weir announced his retirement on 23 October 2013. He also announced that he would join NBC Olympics as a figure skating analyst for the 2014 Winter Games in Sochi.

A documentary Pop Star on Ice was also made about Weir and his career by filmmakers James Pellerito and David Barba. He also starred in his own show called Be Good Johnny Weir.

In 2007, the Ice Symphony song was awarded Weir ‘For the Love of Russia’. The United States Figure Skating Association and Skating Magazine announced him as the winner of the 2008 Reader’s Choice Award for Skater of the Year.

He received the “Visibility Award” from the Human Rights Campaign in 2010. In the same year, he also won the NewNowNext Award for ‘Most Addictive Reality Star’ for the documentary films Be Good Johnny Weir and Pop Star On Ice.

He represented American acting on behalf of Secretary of State Hillary Rodham Clinton as a Goodwill Sporting Ambassador to Japan in 2012. He was honored as the 2013 National Hero by the non-profit foundation Delaware Valley Legacy Fund.

He has a net worth of this skater is around $4 million but his salary is not revealed yet as of 2022.

Weir suffered controversy during the 2010 Winter Olympics in Vancouver when two Canadian broadcasters were homophobic about his performances, making derogatory comments about his sexuality and presentation.

At the 2010 Olympics, he suffered controversy by wearing fox fur on his skating costume at that event. Similarly, he again suffered controversy when he involved himself in the discussion of whether the US should boycott the Sochi Olympics because of Russia’s anti-gay laws.

Johnny Weir has an athletic body type. He stands 175 cm (5 feet 9 inches) tall and weighs 63 kg. He has green eye color and he has dyed his hair dark brown.

Celebrities who have struggled with phobias in their real life!