JoJo is recognized as an American renowned singer, songwriter, and actress. She is currently in a relationship.

JoJo is recently engaged with actor Dexter Darden. On 25 December 2021, Dexter proposed to JoJo on the occasion of Christmas 2021. 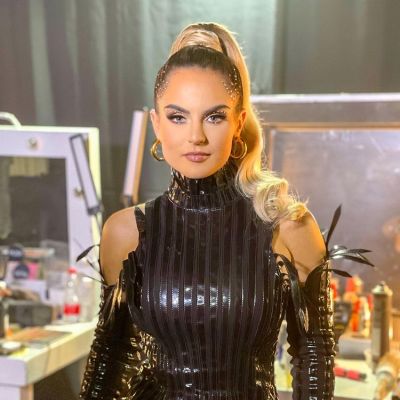 I'm not trying to be like the cleanest person who's, like, never gonna show her stomach or anything, but I think I'm real for real girls.

I'm not Britney mark two. It's unfair that people compare us. I guess we are both young artists but we're totally different.

JoJo is recognized as an American renowned singer, songwriter, and actress. She emerges the fame with her debut single “Leave (Get Out) which peaked atop the US Billboard Pop songs chart.

Similarly, she was a runner-up of a reality singing competition television series, The Masked Singer.

JoJo was born on the 20th of December 1990in Brattleboro, Vermont, U.S. Her real name is Joanna Noelle Levesque.

She grew up in a one-bedroom apartment in Keene, New Hampshire, Foxborough in a low-income family. JoJo is the only child of Joel Maurice Levesque (father) and Diana Levesque (mother).

When she was four years old, her parents got divorced. Her mother was trained in musical theater and sang in a Catholic church choir.

Talking about her academic background, she attended Northeastern University major in cultural anthropology.

She holds an American nationality and belongs to mixed (Irish, Polish, and French) ancestry.

Since the age of two, JoJo started singing from nursery rhymes to R&B, jazz, and soul tunes. She made her first television appearance on the show Kids Say the Darndest Things: On the Road in Boston alongside Bill Cosby.

She was offered a record deal at the age of six but her mother turned it down as she was too young for a music career. At the age of 12, she signed with Blackground Records and released his debut single, “Leave (Get Out)” in 2004.

On June 22, 2004, she released her first album, JoJo via Blackground Entertainment and Universal Music. The album peaked at number four on the U.S. Billboard 200 and number ten on the Top R&B/Hip-Hop Albums.

Similarly, her fourth studio album, Goos to Know peaked at number #4 on the UK R&B Albums chart. She released a new song, Creature of Habit in May 2021.

Apart from the entertainment industry, she involves in several charities such as She’s the First, World Vision, and so on.

The singer was sued by record label Blackground Entertainment for not releasing her third studio album in 2013. She later won the case and was released from the contract and signed to Atlantic Records.

JoJo has earned an impressive amount of fortune from her successful career as a singer, songwriter, and actress. As of 2022, she has an estimated net worth of around $14 million.

The singer stands at the height of 5 feet 3 inches tall and her weight is about 56 kg. Likewise, she has a grey pair of eyes and light brown hair color.

She occasionally wears piercing on her left eyebrow. Her dress size is 10 (US) and her shoe size is 6 (US). Similarly, her bra size is 34C.

JoJo has also a self-titled YouTube channel with over 925k subscribers. She is also active on Tiktok with over 891.9k followers.