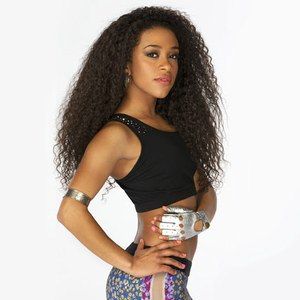 JoJo Offerman is in a relationship with a WWE wrestler Bray Wyatt. On March 27, 2019, she announced that she is pregnant through her Instagram. This couple is expecting to deliver in June.

Before this, JoJo was in a relationship with her high school boyfriend, Sebastian. They knew each other from the age of five years. However, both the couple relationship wasn’t good because of JoJo Offerman being busy at work.

This wrestler is also linked with other men like Justin Gabriel, Randy Orton, and Jake Carter.

Who is JoJo Offerman?

JoJo Offerman is an American ring announcer, as well as former professional wrestler, and singer. Likely, she is signed to WWE under the ring name JoJo on the Raw brand. She was part of the E! Network reality television shows Total Divas.

She has two brothers namely, David & Anthony. She likes singing, dancing, acting, wrestling, etc. JoJo holds American citizenship but her ethnicity is Mexican and Dominican. Her birth sign is Pisces.

Talking about JoJo’s education history, she graduated from John Burroughs High School in 2012.

Talking about her profession, in May 2013, Offerman joined WWE and E! Network’s reality shows Total Divas, which shows behind the scenes footage of select WWE Divas and a look into their personal lives.

Additionally, at just 19 years old, Offerman made her main roster debut under the ring name “JoJo” on the June 26, 2013, episode of WWE Main Event. On the following week on Raw, JoJo appeared in a backstage segment also involving The Bella Twins, Natalya, The Funkadactyls, and Eva Marie.

JoJo Offerman has also served as the special guest ring announcer during a singles match between Natalya and Brie Bella. After the match, WWE Divas Champion, AJ Lee interrupted Brie Bella‘s victory celebration by cutting a worked shoot promo on the cast of Total Divas.

Following this, JoJo also appeared at ringside to show support for her Total Divas co-stars during their matches. Additionally, JoJo was also booked in her first match on Raw on October 7, teaming with Natalya and Eva Marie in a winning effort against Alicia Fox, Rosa Mendes, and Aksana.

The average annual salary of a professional wrestler is about $5,00,000. As per JoJo’s net worth and salary, they are under review.

JoJo Offerman has a height of 5 feet 2 inches. Additionally, she weighs 50Kg. JoJo’s hair color is brown and her eye color is black.

Also, read the affair, salary, the net worth, controversy, and the bio of Eugene, Finn Balor, Ken Anderson