Talking about his love life, Jojo Sim is presently single and is not dating anyone at the moment. He is focused on his career right now. The star mentioned his crush is Francesca and has made a YouTube video titled, Are We Dating?!? *WE KISSED* on 18 August 2020.

Previously, the star was in a relationship with Lien. But, they separated soon mentioning they are good friends at the current time. Jojo had also introduced her to his fans in a video titled, Having a conversation with my EX-GIRLFRIEND… (Disney actress). 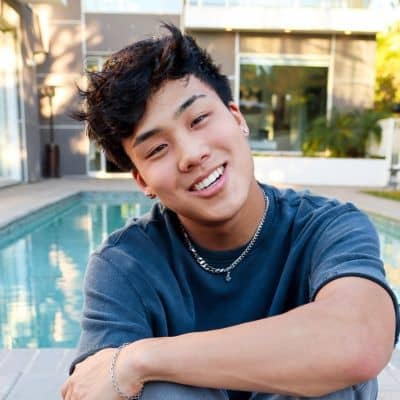 Who is Jojo Sim?

Jojo Sim is a well-recognized YouTube star, Instagram star, and social media personality. Sim is widely famed for being a comedic and fun content creator and is known for his channels, Free Time and Nick and Jojo.

Moreover, he is also known for releasing challenge videos based on current trends, recommendations, and fan ideas on his YouTube channel.

Jojo Sim was born on 13 December 1999. At present, his age is 22 years old. Likewise, his birthplace is Los Angeles, California, the USA.

Not much is known about his father and mother’s details, Jojo has been secretive about his family details. Moreover, he has not shared his sibling’s information in the public yet.

Talking about his nationality, Sim holds an American identity whereas his ethnicity is Asian(Korean-Japanese).

Regarding education, the star might have completed his higher educational background in the public now.

Jojo is professionally a social media star who has a good number of fans and followers on social media. He came into the limelight as a collaborator of the popular YouTube channels, Free Time, Nick, and Jojo. He is best known for posting challenge videos based on current trends, and fans’ ideas, and recommendations on both channels.

Additionally, Sim always had a creative mind and began earning fame and notoriety on the Free Time channel in 2018. The channel has more than 3.09 million subscribers with many of its videos gaining over one million views apiece. Jojo and his collaborator, DangMattSmith and Hunter Rowland also feature on the Free time channel.

The famed star created the channel on 27 April 2014 and is represented by TalentX Entertainment. He has also endorsed and promoted several brands including Never bored. Earlier, he created his own personal YouTube channel on 28 January 2013. Sim is seen doing many pranks videos, challenges, and collaboration videos.

Besides, Jojo and his fellow star, Nick began a duo channel of their own on 29 December 2016 and named it Nick and Jojo. They upload videos of random vlogs, reactions, and storytime videos along with other interesting content.

A multi-talented artist, Sim has earned a handsome amount of money from his multiple profession. He has gained a good name and fame on different social media.

It is reported that Jojo Sim has an estimated net worth of $1.5million.

Jojo has never been part of any controversial matter or rumors till now. The star has been preoccupied with his professional and private life.

It seems that Sim prefers enjoying his personal life and does not want to merge it with his professional life.

21 years old star, Jojo has dashing looks, a muscular body, and an admirable personality. He stands at a height of 6 feet 6 inches. Also, he has a balanced body weight of 64 kg.

Furthermore,  has Sim brown eyes whereas his hair is dark brown.

Regarding his social media presence, Jojo Sim is an active personality on social media. Jojo has more than 280k followers on his official Instagram account @jojosim.

He is also active on Twitter with around 29.2k followers. The star has more than 4.4 million followers on his official TikTok.