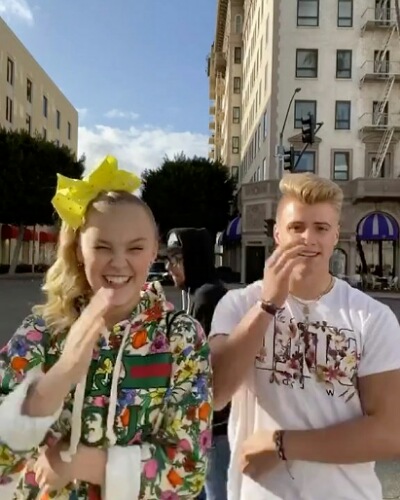 Update: Jojo Siwa and Elliott Brown were just rumored to be dating. Jojo is presently having an affair with Kylie Prew.

Jojo Siwa and her new boyfriend

Jojo Siwa has grown up before the viewers. She used to be on the show Dance Moms with her mother Jessalynn Siwa.

And now she has become a YouTuber and an Internet sensation with her videos going viral most of the time. This ponytail-wearing Internet enthusiast who does fast-talking has a new person in her life.

She is in love and is dating a high school football player named Elliot Brown. They have not gone public about their relationship.

But there are enough hints to point to it. Because in the last few weeks, the duo has posted a number of photos and videos on their Instagram together.

“we were waiting to cross the street and we missed the walk signal 3 times for this tik tok…… definitely worth it. “

The video showed the two synchronizing some hand moves. One fan wrote:

“when JoJo siwa gets a boyfriend before you.”

In another post, the two have placed their shoed feet on a chair and are showing off their outfits. Jojo wrote below this post:

“Twinning for the win!! E didn’t have shoes that matched his outfit so i made him wear some fancy sparkly high tops!???? i’d say we look pretty cool.”

On the same day, Elliott also uploaded a similar picture of the same moment but in a different pose. He wrote below this picture:

There was a heart emoji in this caption. One of his female friends wondered how Jojo git a boyfriend before her.

The Twitter platform also had a number of different responses to learning of her probable boyfriend. One person wrote:

“funny how jojo siwa has a boyfriend & you don’t”

funny how jojo siwa has a boyfriend & you don’t pic.twitter.com/mSJYS8T7fj

my brain cannot handle the fact that jojo siwa has a boyfriend pic.twitter.com/88l91oGSKq

“JOJO SIWA DRESSES AND LOOKS LIKE A OVERGROWN TODDLER AND SHE HAS A FUCKING BOYFRIEND WHILE IM LONLEY AND SINGLE I HATE IT HERE!!!!!!”

JOJO SIWA DRESSES AND LOOKS LIKE A OVERGROWN TODDLER AND SHE HAS A FUCKING BOYFRIEND WHILE IM LONLEY AND SINGLE I HATE IT HERE!!!!!! pic.twitter.com/IN75WanM4P

Who is Elliott Brown? More about the couple’s relationship

Elliott Brown is from the same hometown as that Jojo, Nebraska. He studies at the Elkhorn South High School situated in Omaha, Nebraska. He lays football for the school and is on the school’s football team. And next year, he will join the University of Nebraska and also play for them.

Jojo is not in the regular school and is home-schooled. So how and where did Jojo meet Elliott? There is no information on it but their first meeting most probably was in the city of Omaha where Jojo also belongs to. But from the couple’s posts on their respective Instagram, it does look like they enjoy each other’s company very much.

Elliott would be Jojo’s first boyfriend because, in 2017, she had stated that she is more focused on her work rather than meeting boys. She told on her YouTube channel:

“I don’t think boys are necessary to date when you’re my age. Just be friends and just have fun and then later on in life have fun when you’re older.”

“Now, for me it’s just about being a kid and just having fun and living my life and being myself. I don’t need a boyfriend.”

In May 2019, though she was not dating anyone, she did admit that she had a crush on someone before. In an interview given to TODAY’s Natalie Morales, she said:

“I had a crush on somebody but it blew over,” she said. “I’ve never met him before, but we’ve talked online… the chase is over. I’m sure once we meet eventually that I will end up liking him as a very good friend.”

Jojo Siwa is an American child dancer and social media star. She is best known as one of the top five finalists in the second season of the Lifetime series Abby’s Ultimate Dance Competition. She is also popular for being the youngest dancer to make it to the season two finale. More Bio…