Jon Brion is an instrumentalist, singer, songwriter, composer, and record producer. He is possibly single.

Jon Brion was in a romantic relationship with comedic actress Mary Lynn Rajskub dating back to 1997. However, the pair decided to split after finding incompatibilities between each other in 2002. Since then not much is known about his personal life, affairs, and relationships. 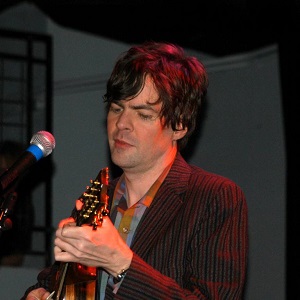 I'd like to think that most of what I do is self-evident if you're listening to it or seeing it. But I don't mind the fact that it's hard to describe

If we're given a number of circumstances to deal with, the brain goes into this mode of trying to find a solution, and it's amazing how good we are at it.

Who is Jon Brion?

Jon Brion is a rock and pop multi-instrumentalist, singer, songwriter, composer, and record producer who hails from America.

He garnered a lot of fame and popularity as a music composer for hit movies such as Hard Eight, Magnolia, Punch-Drunk Love, Eternal Sunshine of the Spotless Mind and I Heart Huckabees.

He was born December 11, 1963, in Glen Ridge, New Jersey, United States. Her mother, LaRue is a retired administrative assistant and singer, and his father, Keith Brion is a former band director.

He grew up alongside his brother and sister. His ethnicity is Caucasian. As he was born to a family full of musical talents, it was nothing new that he too developed a keen interest in music from an early age.

Surprisingly, he dropped out of high school after facing difficulties and pursuing a career in music.

Jon Brion initiated his career by forming a band alongside musician/producer Bill Murphy, namely, The Bats in the early 1980s. as a result, they released their only album How Pop Can You Get? which garnered a positive response but commercially not as positive. After that, he played guitar on The Wallflowers’ hit song “One Headlight.”

After establishing himself as an experienced session player, he released his first solo album Whatever in 1993. Moreover, he became producer and composer of songs for hit movies such as Hard Eight, Magnolia, Punch-Drunk Love, Eternal Sunshine of the Spotless Mind and I Heart Huckabees.

The exceptional talents he displayed in his career inevitably amassed him a lot of fame and popularity. In the same way, he generated enough income to increase his net worth. However, his salary is still not exact to be told, as various sources have their own say regarding it.

Once he was rumored to be gay by his fans. But, he denied the rumor saying that he is straight. Moreover, there is a rumor that he is working on his second solo album at Abbey Road Studios.

Jon Brion has an average body structure with decent height and weight matching his body.

His hair color is dark brown and his eye color is hazel blue.