Jon Foster is an American actor and musician who appeared in Murder in Greenwich, Law & Order: Special Victims Unit and many more. Jon is married since 2015.

Jon Foster is a married man. He is married to his long term girlfriend turned wife, Chelsea Tyler. Chelsea is an actress and musician just like him.

She is well-known as the daughter of the legendary American musician, Steven Tyler, the vocalist of the rock band, Aerosmith. She performs with him together in the electronic soul band ‘Kaneholler’. The duo has also released two successful EPs.

Jon proposed her in early 2014 and the couple got engaged. A year later, the couple exchanged wedding vows in Carmel, California, the United States of America on 20th June 2015.

Chelsea’s pregnancy was announced in September 2019. On February 21, 2020, she gave birth to a baby boy and named him Vincent Frank Foster. They announced the birth of their baby on social media. 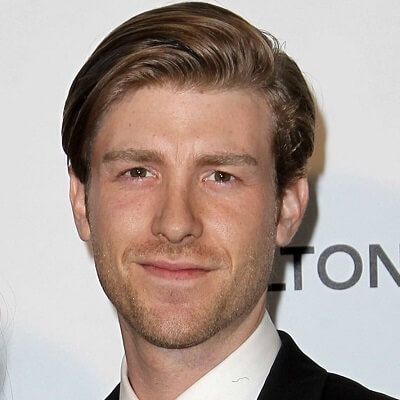 Who is Jon Foster?

Jon Foster is an American musician and actor.

He is famous for his works in ‘The Door in the Floor’, ‘Stay Alive’, ‘Brotherhood’, and ‘Rampart’. Also, he and his wife, Chelsea Tyler are the founders of the electric-soul band, ‘Kaneholler’.

He was born as their youngest son. Jon has an older brother, Ben Foster who is a famous actor.

His paternal grandparents were A. (Abraham) Frank Foster, a politician, and judge based in Boston and Celia (Segal).

He spent his childhood days in Fairfield, Iowa. His ethnicity is Russian Jewish.

He has not revealed anything about his educational background. However, he does look like a well-educated man.

Jon Foster started off acting in a local Iowa theatre. Eventually, he earned lead roles on the big screen. He made his film debut in the 2000 film ‘Thirteen Days’ by portraying the character of Kenny O’Donnell Jr.

Some of his other famous works include the portrayal of George in the TV series, Ben & Kate, Graham in The Informers with Amber Heard, and Eddie O’ Hare in ‘The Door in the Floor‘.

In 2002, he earned a nomination for the Young Artist Award for Best Performance in a TV Movie, Miniseries or Special – Leading Young Actor for his role of Michael Skakel in ‘Murder in Greenwich’.

In 2016, he portrayed Roscoe Joe in Poor Boy. Furthermore, in 2018, he portrayed Owen in Like Father. In 2020, he had a recurring role as Dustin Shepard in 9-1-1: Lone Star. He has also made appearances in Law and Order and Suits as Justin Sharp and Trent Devon respectively.

Jon is a man of many interests and talents including extreme sports, songwriting, music production, and touring. He is the co-founder of the electronic-soul band, Kaneholler.

Jon Foster has an estimated net worth of around $1.6 million as of 2022. However, there is no information about his salary. An average American actor earns around $60k annually.

There are no rumors about him. Similarly, he has not been a part of controversies.

He is very focused on his career and has not done anything to ruin his image and reputation. Foster is a well-respected man in the film industry.

Jon stands at a height of around 5 feet 10 inches. Moreover, he weighs around 82 kg. He has brown hair and green eyes.

Foster is active on social media sites. He has around 3.1k followers on Twitter.

Tags : American musician and actor Kaneholler The Door in the Floor