Heder is married to Kristen Bales. They met each other while studying at Brigham Young University. The duo started dating and tied the knot on Nov 23, 2002.

The couple has three children together. Their daughter Evan Jane Heder was born in 2007. Another child son Philip Hederin was born in  2009 and lastly Timothy Heder in 2014. 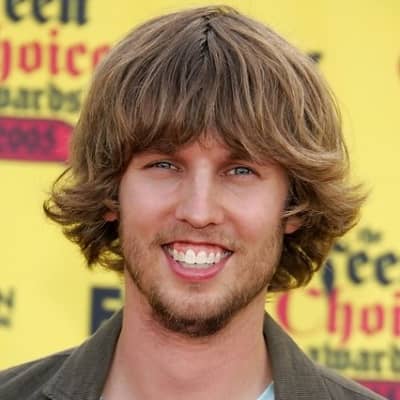 Who is Jon Heder?

He has worked in various movies and also provided sounds for most animated movies like  Monster House, Surf’s Up, and Pinocchio, as well as Napoleon Dynamite.

His parents are Helen (née Brammer) and James Heder. James was a physician. The family moved to Salem, Oregon when he was about 2 yrs old.

Jon has an identical twin brother, Dan Heder. He has four siblings: sister, Rachel, and brothers Doug, Adam, and Matt.

He holds an American nationality and is of mixed (Swedish, Danish, English, German, Scottish, and Dutch) ancestry.

Jon has his schooling at Walker Middle School in Salem. Then he completes his graduated from South Salem High School in 1996.

Moreover, he is a 2002 alumnus of Brigham Young University. He is a computer animator and had majored in 3D animation.

Jon started his career by having various guest appearances and landing various roles in the movies and series. His career took off after his performance in the 2004 movie Napoleon Dynamite. After that, he hosted Saturday Night Live in Oct 2005.

2006 was the year he performed in three movies The Benchwarmers,  Monster House, and School for Scoundrels. He also landed various comedy roles in movies like Blades of Glory (2007). Likely, John started his voice career providing sound Chicken Joe, a surfing chicken, in the animated film Surf’s Up.

Followingly, he produced and starred in the 2008 web series Woke Up Dead. He’s also been a regular presence in animated TV series and many other movies. John also performed with his twin brother, Dan in the popular internet martial arts comedy series Sock baby.

Moreover, John’s performance in When in Rome was praised by New York Times. He has also appeared in the music video for “On Top of the World” in 2013, and in Chromeo’s song “Old 45s” in 2014.

The star made sure to stay away from potentially scandalous projects and any controversial topics. He even stated that he’s not comfortable engaging in any stuff that’s too broadly edgy or which would conflict with his faith.