Won the gold medal in the men's skeleton event at the Winter Olympics in 2010.

Moving onto his marital life, the Olympic champion Jon Montgomery is married to Darla Deschamps-Montgomery. Darla, herself is also a skeleton athlete. The two were married on August 06, 2011.

Their child, a baby boy named Jaxon Mark Montgomery was born on Tuesday, August 23, 2016. The family resides together with their chocolate Labrador Stark in Victoria, British Columbia.

In 2019, the couple is again blessed with a baby girl named Lennon. 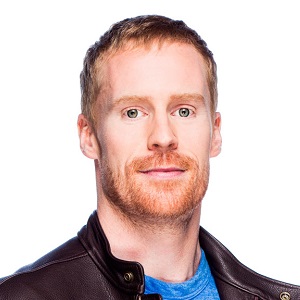 Who is Jon Montgomery?

Jon Montgomery is a Canadian skeleton racer, business person, and TV host. He won the gold medal in the men’s skeleton event at the Winter Olympics in 2010.

Montgomery was born Jonathan Riley Montgomery on May 6, 1979, in Russell, Manitoba, Canada. He was born to Joan and Eldon Montgomery. He has two sisters, named Joan and Jill.

The information regarding Jon’s early life, childhood and teenage days, etc. is unknown to the mainstream media to date.

Although much of his educational background and qualifications are unknown, Montgomery is an alumnus of the Canadian Automotive Institute, now the Automotive Business School of Canada, Georgian College.

Montgomery started skeleton racing when he lived in Calgary. There, he worked as an auctioneer not far from Canada Olympic Park.

Sometime in 2002, he visited a track where a skeleton race was being held. Jon was immediately hooked on the sport and started racing competitively not long after watching it in Calgary.

Initially, Montgomery did not do well in his first two seasons competing on the World Cup tour. He won his first World Cup race later in Cesana, Italy, in 2008.

That same year, he also won two silver medals at the 2008 FIBT World Championships in Altenberg, Germany. He earned them in the men’s skeleton and mixed bobsleigh bobsleigh-skeleton team event.

Montgomery qualified for the 2010 Winter Olympics based on his results in the 2009-10 Skeleton World Cup. In the Olympic event, he established the fastest times, including a track record of 52.20 on his third run.

Montgomery went on to win the gold medal by 0.07 seconds. He accepted his gold medal at the medal ceremony in Whistler on February 20, 2010, becoming the second Canadian in a row to win gold in the men’s event.

Following his win, he marched through a crowd of Canadian fans singing the national anthem and chugging a pitcher of beer. Jon also wore an image of a painted turtle on the crown of his helmet while racing.

He explained the usage, saying he had decided to do so after finding one trying to cross the road in British Columbia. BC Hydro noted his representation of the endangered species in describing their sponsorship of research into the turtle’s conservation.

In 2011, Montgomery won a bronze medal at the 2011 FIBT World Championships as a mixed team. On June 5, 2013, it was announced that Jon would be the host of CTV’s The Amazing Race Canada.

A year later, Montgomery failed to qualify for the 2014 Winter Olympics in Sochi. He announced that he is “99 percent sure” his skeleton career is over. In September 2015, he finished his third year as the show’s host and returned for the fourth year.

When not skeleton racing, Montgomery still works as a sales consultant and automobile auctioneer in Calgary.

As stated in an interview with CTV, he has a tattoo of a maple leaf over his heart with the word Canada above it. He got it after graduating from high school.

Montgomery also stated that he hopes his gold medal performance inspires more people to enter amateur sports and went on to reassure mothers that skeleton is a safe sport for children to enter.

Jon also added that he hopes his gold medal victory will help to establish an all-amateur sports channel for Canadian athletes.

While his salary is unknown, Montgomery has a net worth of $20 million.

Jon said that he would support the boycott of the 2014 Winter Olympics in Sochi regarding Russia’s strict anti-gay laws.

Other than this, there are not many significant rumors and controversies regarding Jon Montgomery in the mainstream media to date.

He has thus far, managed to keep her image clean in the eyes of the general public.

He has golden brown hair color as his eye color is greenish-blue.

Also get to know more about the birth facts, education, career, net worth, rumors, height, and social media of different personalities like Jasmine Roth, Curtis Stone, and Tan France.