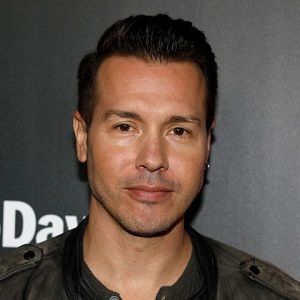 I ran into a couple of guys who were boxers. They talked me into working out at their gym. I became obsessed with boxing and the idea of becoming a champion.

Jon Seda was in a relationship with his girlfriend Lisa Gomez. After dating for more than a year, the couple married on July 4, 2000. Now they lived happily with their family.

Who is Jon Seda?

Jon Seda is one of the recognized names in the entertainment industry. He is an American actor who is famous for playing the role of Detective Paul Falsone in the crime drama Homicide: Life on the Street. Likewise, he also gains popularity after portraying the role of Selena as Chris Perez.

Seda was born on October 14, 1970, in New York City, the United States. His parents are Puerto Rican descent but their names are not known. He was raised in Clifton, New Jersey.  He also has a sister named Sofia Seda in his family.

He finished his high school in Clifton New Jersey and then he started to work out in a gym. He was also a runner-up in Golden Glover competition in New Jersey.  Moreover, he played a game s a boxer and have good record init too. He held a record of 21 wins and had only one loss. The name of the school or universities he studies is unknown.

He started his career in the year 1992. He played the role of Romano, a Cuban boxer in Gladiator. After that, he began to appear on different TV series.

In 1997, he portrays the character Chris Perez in Selena starring Jennifer Lopez which became of the breakthrough in his acting career. That movie is based on the real story of Tejano singer Selena Quintanilla Perez who was murdered on the brink of her rising career. Seda played Selena’s hubby.

It was in the year 2002 when he played his first lead role in the big screen in King Rikki. It was a re-imagining of Shakespeare’s Richard III in East L.A. playing as a protagonist.

After that, Jon Seda appeared in many of the movies. Some include Bad Boys II, Larry Crowne, Bullet to the Head. Likewise, subsequently, he appeared in different TV series. Moreover, the actor also starred as one of the three main stars in the HBO World War II mini-series The Pacific. It was one of his famous hits.

Likely, Jone made a cameo in Ludacris’ song Runaway Love. There he appears as an abusive alcoholic stepfather. Talking about his latest work, he portrayed the role of Detective Mike Watts in the movie Canal Street in 2018.

Seda has performed in various great movies. And so he was also nominated for the Best Male Lead for Spirit Award for his role in Like It Like That.  Likewise, he also has his name on the nomination for the Palm d’Or for his portrayal of the character Blue in The Suncahser.

Jon Seda: Salary and Net Worth

Jon net worth is not public, however, sources have claimed it to be around $2 million. He has bought his first car 78 Camaro at $750.00.

He must have maintained a good relationship with all the other people in his personal and professional life. And so he doesn’t fall under any rumors and controversies.

Jon Seda has maintained his body fit standing with a height of 5 feet and 7 inches. Likely, his weight is 76 kg and has light brown colored hair and eyes.

Douglas Peter Savant
Tags : ‘Homicide: Life on the Street’ American Actor Detective Paul Falsone Like It Like That The Suncahser
Suggest Bio Update