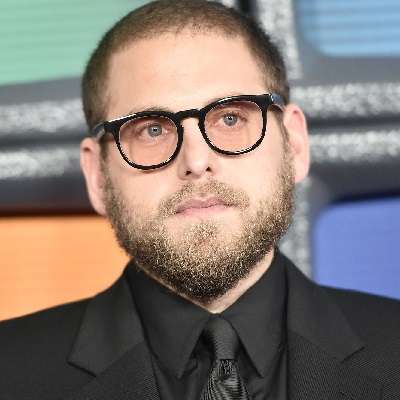 I play a lot of games on my iPhone. There is a game called Rat on a Scooter that I will promote as much as possible because it has brought me so much joy

I assume everything I do in life is gonna be a failure, and then if it turns up roses, then I'm psyched

Professionally, I feel like I won the lottery and I am the luckiest person in the entire world.

Previously, he was engaged to Gianna Santos. The engagement took place in October 2019 after dating for a year. However, they broke their engagement in October 2020 and got separated.

His ex-fiancee, Santos is a New Yorker. Also, she worked on one of Hill’s Vampire weekend video.

Who is Jonah Hill?

Next, he will make his appearance in the movie, Don’t Look Up as Jason Orlean. Currently, the movie is being filmed.

Jonah Hill was born on 20th December 1983 in Los Angeles, California, United States. His birth name is Jonah Hill Feldstein. He is of Jewish-Germanic ethnicity.

He is the second child of his parents; Sharon Lyn-Chalkin and Richard Feldstein. His father, Richard is an accountant of the rock band, Guns N’ Roses whereas his mother, Sharon is a costume designer.

His elder brother, Lt. Jordan Feldstein was a music manager. He passed away from a pulmonary embolism at the age of 40. His younger sister, Beanie Feldstein is an actress.

Along with his siblings, he grew up in a well-off family in the Cheviot Hills of Los Angeles. Moving to his academics, he attended He completed his High School education from the Crossroads Schools. Later, he joined The New School ad the University of Colorado Boulder. However, he dropped off from those universities.

Since his college days, he was extremely active as a performer. He has performed the plays including Black and White in East Village of New York City.

His career as an actor started with the movie, I Heart Huckabees as Bret. Following the movie, he made his appearance in the series including NYPD Blue, Campus Ladies, and Human Giant in some character roles.

In 2007, he featured the movie, Superbad. In the comic movie, he appeared as Seth, the leading character of the movie. Through the movie, he made his identity as a comic actor. Since then, he has never looked back and became the cast of various sit-com movies.

Besides comic character, he is also popular for his biographical movies like Walk Hard: The Dewet Cox Story, Moneyball, The Wolf of Wall Street. For performance as Peter Brand in the movie, Moneyball, he received his first Oscar nomination.

Following that he received his second Oscar nomination for the movie, The Wolf of Wall Street as Donnie Azoff.

Besides being an actor, he is a talented director, producer, and writer. As a writer and producer, he was associated with the movies like 21 Jump Street and 22 Jump Street which had been recognized as one of his career’s best.

In 2011, he made his directing debut with the short video, Sara Bareilles: Gonna Get Over You. Following that, he directed the videos like Danny Brown: Ain’t It Funny and Travis Scott: Wake Up.

As of 2020, he has an estimated net worth of $50 million. His net worth includes the house that he bought in 2019 in Santa Monica, California worth $6.8 million.

As an actor, he earns in the range of $21k to $215k. Besides that, he also earns through his career as a producer, director, and writer.

He has blue eyes with brunette hair. He stands at a height of 5 feet and 7 inches and has a decent weight.

However, his weight journey is inspiring in itself. He gained weight up to 118 kg as the heaviest. He started his weight loss journey in 2011.

However, he had to gain weight once more of the character, Efraim Diveroli in the movie, War Dogs. At the time, he put up to 40 pounds. Currently, he is in one of the fittest version of himself.

Back in 2014, he came into the headlines when he apologized for using some homophobic slur. The actor had been being followed by a photographer who had made comments on his outfits.

Within a rage, the actor lashed him yelling some homophobic slurs. One hour later, he posted a video apologizing for his action.

On Twitter, he is only following The New York Times.

Jonah Hill engaged to Gianna Santos! Hill on his body insecurities and his directorial debut!