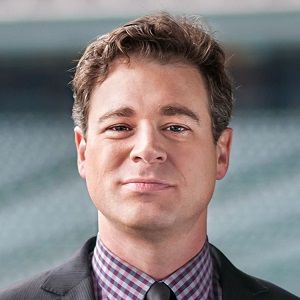 What is the relationship of Jonah Keri?

The prominent journalist Jonah has kept his personal life as a secret and as well as away from social media. He hasn’t provided any information about it as he only wants to focus on his career rather than giving time to his personal affairs.

Who is Jonah Keri?

Jonah Keri is a journalist, sportswriter as well as and editor. He is a New York Times bestselling author and belongs of Canadian nationality.

Jonah Keri was born on 20th September 1974 in Montreal, Canada. He was an avid fan of the Montreal Expos, something he attributes to his grandfathers’ love of baseball. Besides this, there is no information about his family as well as his childhood.

Furthermore, he had graduated from Concordia University’s journalism program in 1997.

Jonah Keri has started his professional life as a writer. He knew about baseball and had also written about other sports as well as business and entertainment. His script had been published on ESPN.com, The Wall Street Journal, FanGraphs, GQ, The Huffington Post, The New York Times, Bloomberg Sports, Baseball Prospectus, Investor’s Business Daily, Sports Illustrated, Grantland, FiveThirtyEight, CBSSports.com, The Athletic, and Sportsnet.

Likewise, he had also edited the book Baseball like Why Everything You Know About the Game Is Wrong, and the New York Times Bestseller The Extra 2%: How Wall Street Strategies Took a Major League Baseball Team from Worst to First.

He had also published  Up, and Away: The Kid, the Hawk, Rock, Vladi, Pedro, le Grand Orange, Youppi!, the Crazy Business of Baseball, and the Ill-fated but Unforgettable Montreal Expos in 2014.

Similarly, he had appeared himself during the first season of the IFC series Brockmire in the episode titled “Old Timers Day. Through his hard work in his professional life, he has earned the much which has to fulfill his as well as his family’s needs. But his salary, as well as his net worth, are unknown.

Furthermore, he hasn’t won any awards so far.

There are not any rumors regarding his personal as well as professional life. Moreover, he has never faced any kind of controversy in his career to date.

He has short brown hair with a pair of shiny blue eyes. Besides this, there is no information about his height, weight, and other measurements.