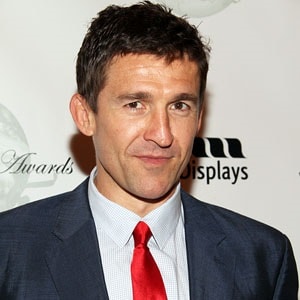 Jonathan Cake is a married person. He has been married to Julianne Nicholson since September 24, 2004.

The couple has welcomed two children: son Ignatius Cake in September 2007 and daughter Phoebe Margaret Cake on April 30, 2009. The family is living together and are spending quality time with each other.

Previously, he was engaged to Olivia Williams but the relationship ended after seven years and just two weeks before their scheduled date of marriage.

Who is Jonathan Cake?

He was born on August 31, 1967, in Worthing, Sussex, England. His birth name is Jonathan James Cake and he is currently 53 years old. His mother is a school administrator and his father is a glassware importer. He has got two older brothers.

Jonathan was invited on stage during a traditional British pantomime for children when he was four years old which ignited his interest in the performing art.

Jonathan had taken drama classes and took part in plays By the age of eight and as a teenager, he toured Britain with London’s National Youth Theatre.

He enjoys playing basketball, cricket, and rugby. Cake holds British citizenship and his ethnicity is English.

He attended Cambridge University and studied English and graduated in 1989. He was a rugby player during his college time.

Later, He joined a two-year training program at the Bristol Old Vic Theatre School and then took training with the Royal Shakespeare Company.

He started his career by appearing in William Shakespeare’s play ‘As You Like It’ in 1992. After that, he appeared in the play at the Barbican Theatre in London in 1993.

He recently appeared as Edward ‘Blackbeard’ Teach on ‘Legends of Tomorrow’ in 2018, and he is currently portraying the role of Mark Antony in ‘Antony and Cleopatra’.

Jonathan Cake was awarded the 2002 ‘Barclays Best Actor Award’ for his stage performance in ‘Baby Doll’. And he also won the 2003 Theatre World Award for his performance in “Medea”.

In addition, he was nominated for the 2007 Falstaff award in the category Best Supporting Actor for his performance in Cymbeline at the Lincoln Center Theatre.

The 51 years old actor has an estimated net worth of around $8 million and he has earned that sum of money from his professional career.

There was a rumor about his sexual orientation as he was supposed to be gay but he denied that rumor.

Jonathan Cake has a height of 6 ft. 3 inches and he has light brown eyes and light brown hair. Other information regarding Cake’s weight, body measurements, etc. are unknown.

To know more about Daniel Bess, Liam Aiken, and Rory Culkin, please click on the link.