TV personality Jonathan Coleman is married to his girlfriend.

Jonathan Coleman is a married man. He is married to Margot Fitzpatrick. However, the wedding details are not disclosed.

They have two children from this marriage.

Coleman’s marriage is going strong as there is no news regarding any extramarital affairs at present. 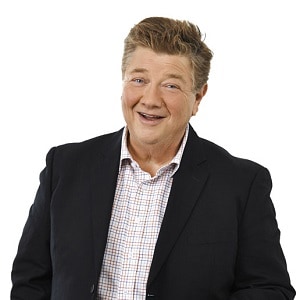 Who is Jonathan Coleman?

Jonathan Coleman is an English Australian writer, television personality, and radio announcer. He is mostly recognized as a member of the children’s TV magazine show ‘Simon Townsend’s Wonder World’.

Additionally, he has also appeared in several other movies and television series.

Coleman was born in London on February 29, 1956. He was born to his mother Sylvia Coleman. There is not much information available about his early life and childhood at present.

He is of Anglo-Australian nationality. Furthermore, he belongs to an English ethnic background.

Jonathan Coleman initially began his career in broadcasting in the late 1970s. He was selected as a member of the show ‘Simon Townsend’s Wonder World’. Additionally, he also worked as a DJ and presenter on ABC’s youth radio network Triple J.

He appeared alongside Max Cullen and Gia Carides in the 1983 movie ‘Midnite Spares’. In addition, Coleman also hosted a music television program on The Seven Network. Since then, he has appeared in several other movies and television series. All in all, he has 9 credits as an actor.

Some other movies and television series that Coleman has appeared in are ‘The Koala Brothers’, ‘The Bill’, ‘The Shrimp on the Barbie’, ‘Young Einstein’, ‘Scuff the Sock’, ‘Hey Dad..!’, and ‘Stanley: Every Home Should Have One.

As for himself, he has been part of several other television shows like ‘Studio 10’, ‘A Crime to Remember’, ‘Australian Story’, ‘Weekend Sunrise’, ‘The Jesters’, ‘Mornings with Kerri-Anne’, ‘Good News Week’, ‘This Morning’, ‘The Wright Stuff’, and ‘Have I Been Here Before?’ among others. Coleman has also worked on several UK radio programs. People also know him as Jono.

Coleman won the James Beard Award for Video Webcast for Savoring the Best of World Flavors, Volume Three: Vietnam and the Island of Sicily.

Coleman has not revealed his current salary. Furthermore, there are no details available about his present net worth.

Coleman became part of controversy during August 2007 after ‘Sunrise’ suspended him indefinitely for revealing the supposed end to ‘Harry Potter and the Deathly Hallows live on air.

Later, he kept his job with 70% of the vote in favor of him to stay in the program. Coleman also made the news after it was revealed that he was battling prostate cancer. At present, there are no rumors concerning his life and career.

Talking about his body measurement, there are no details available relating to Jonathan Coleman’s height and weight. His hair color is dark brown and his eye color is blue.

Coleman is active over social media. He has a huge number of followers on social networking sites such as Twitter and Instagram.