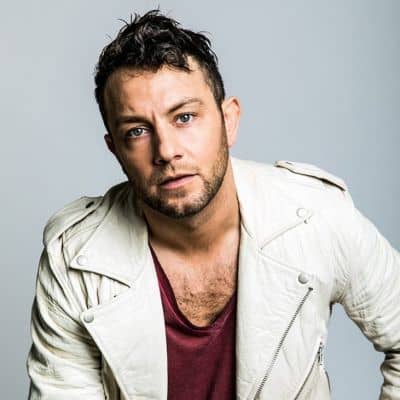 Talking about his love life, Jonathan Sadowski is presently in a relationship with his longtime girlfriend, Melissa Lynn. Melissa is a fashion stylist. The duo has been dating since 2010. The star met her for the while working together.

Additionally, Sadowski proposed Lynn on the set of the Young & Hungry on Friday night 5 June 2015. She accepted the proposal in his co-star Emily’s apartment who shared the news for the first time on her Instagram account.

Since then, Jonathan and his fiance have shared a lot of happy moments on their Instagram. They have been together for a long time without any sign of controversy and rumors.

Who is Jonathan Sadowski?

Jonathan Sadowski is a well-recognized American actor and television personality. Sadowski is widely famed for his role as Josh Xander Kaminski on the Freeform sitcom Young & Hungry from 2014 until 2018.

Moreover, he is also known for his appearance as Henry Goodson in the CBS sitcom, [email protected]*! My Dad Says, She’s The Man, and The Goods: Live Hard, Sell Hard.

Jonathan Sadowski was born on 23 November 1979. At present, his age is 41 years old. Likewise, his birthplace is Chicago, Illinois, the USA.

Jonathan is the son of his father, Robert Sadowski whereas his mother is Marirose Sadowski. Moreover, he has an older brother named Mark who is the present director of College Scouting for Chicago Bears.

Talking about his nationality, Sadowski holds an American identity whereas his ethnicity is Polish-Italian.

Regarding education, the star graduated from the University of Illinois with a Bachelor of Fine Arts in Theater.

Professionally, Jonathan made his acting debut in 2003 in a TV show named NCIS. He portrayed the role of Lt. Norski. Likewise, the star featured in the role of Paul Antonio in a popular movie titled, She’s The Man. He performed in Henry Goodson in [email protected]*! My Dad Says from the year 2010 to 2011.

Likewise, in 2006, Sadowski featured in the American romantic comedy sports movie, She’s The Man. Jonathan portrayed the role of Paul Antonio, Viola’s best friend, and gay hairstylist. The film is about a teenager named Viola Hastings who goes to her brother’s new boarding school. He pretends to be a boy so that she could play with the boys’ soccer team.

Additionally, the star featured Josh Xander Kaminski on the Freeform sitcom, Young & Hungry. The series aired from 2014 to 2018.

Apart from this, Sadowski has featured as a guest in NCIS, House, and Chuck. He also played vital roles in the 2007 action thriller Live Free or Die Hard, Wade in the 2009 horror film Friday the 13th, Blake in the 2009 comedy film, The Goods: Live Hard, Sell Hard, Paul in the 2012 disaster horror film, Chernobyl Diaries, and so on.

A talented star, Sadowski has earned a handsome amount of money from his profession. He has been active in his profession from the year 2000 till the present.

It is reported that Jonathan Sadowski has an estimated net worth of $4 million. He lives a lavish lifestyle.

However, the prominent personality has not disclosed his exact salary, earnings, and assets details till now.

Jonathan has never been part of any controversial matter or rumors till now. The actor has been preoccupied with his professional and private life.

It seems that Sadowski prefers enjoying his personal life and does not want to merge it with his professional life.

41 years old star, Jonathan has handsome looks and an admirable personality. He stands at a height of 6 feet 1 inch. Also, he has a balanced body weight of 79 kg.

Furthermore, Sadowski has blue eyes whereas his hair is black.

Regarding his social media presence, Jonathan Sadowski is an active personality on social media. Jonathan has more than 174k followers on his official Instagram account @jonathansadowski.

Sadowski is also available on Facebook with nearly 36.6k fans and supporters.