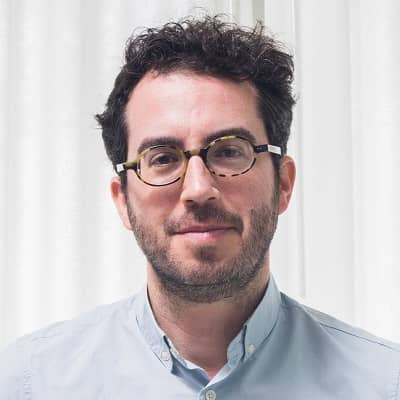 Sometimes I can hear my bones straining under the weight of all the lives I'm not living.

Time was passing like a hand waving from a train I wanted to be on.

As of now, Jonathan’s relationship status is possibly single after his divorce.

Previously, Foer married writer Nicole Krauss in June 2004. The couple lived together in Park Slope in Brooklyn, New York. But, they divorced in 2014.

The duo also has two children together. Their son’s name is Sasha Foer and other details about their children are not disclosed.

After that, Jonathan was dating an actress Michelle Williams in July 2015. The couple split sometime in 2016.

Who is Jonathan Safran Foer?

Jonathan Safran Foer is an American novelist. He has written novels like Extremely Loud & Incredibly Close, Eating Animals and We Are the Weather: Saving the Planet Begins at Breakfast.

Jonathan was born on February 21, 1977, in Washington, D.C., U.S. His father’s name is Albert Foer, who is a lawyer and also president of the American Antitrust Institute.

Likely, his mother’s name is Esther Safran Foer, who is now a Senior Advisor at the Sixth & I Historic Synagogue. She is a child of Holocaust survivors.

He has two brothers. His younger brother’s name is Joshua Foer, who is a journalist and is the founder of Atlas Obscura.

His older brother’s name is Franklin Foer, who is a writer and is also a former editor of The New Republic.

He belongs to American nationality and is of Jewish ethnicity.

Talking about his education, he completed his schooling from Georgetown Day School and completed his graduation from Princeton University in 1999 with a degree in philosophy.

After graduating he attended the Mount Sinai School of Medicine before dropping out to pursue his writing career.

He studied creative writing under the mentorship of renowned author Joyce Carol Oates.

Finishing his graduation, Jonathan Safran Foer moved to Princeton for his thesis. Within his thesis, he wrote the novel, Everything Is Illuminated, which was published by Houghton Mifflin in 2002. The book also earned him a National Jewish Book Award (2001) and a Guardian First Book Award (2002). Jonathan also comes in The 15 Most Overrated Contemporary American Writers List.

Likely, in the year 2005, Liev Schreiber wrote and directed a film adaptation of the novel, which starred Elijah Wood.

Foer’s second novel Extremely Loud & Incredibly Close, was published in 2005. Additionally, Warner Bros and Paramount produced a movie based on the novel which was produced by Scott Rudin and directed by Stephen Daldry.

Foer also wrote the libretto for an opera titled Seven Attempted Escapes From Silence, which premiered at the Berlin State Opera on September 14, 2005. From spring 2008, Foer started to teach as a visiting professor of fiction at Yale University. He is currently a writer-in-residence in the graduate creative writing program at New York University.

Additionally, his third book, Eating Animals was launched in 2009 and received the New York Times bestseller title. His third novel, Tree of Codes, was published in November 2010. Foer then signed with a two-book deal with Little, Brown in May 2012. His novel, Escape From Children’s Hospital and respectively  Here I Am get released in 2016.

Talking about his recent works, he was a part of the book tour for We Are the Weather: Saving the Planet Begins at Breakfast in 2019.

Furthermore, he participates in an on-stage conversation with Samin Nosrat about eating and climate change, “Salt, Fat, Acid, Heat.

Foer is also one of the board members for Farm Forward, It is a nonprofit organization that implements innovative strategies to promote conscientious food choices, reduce farmed animal suffering, and advance sustainable agriculture.

The author also has his five videos in the C-SPAN Video Library, The first appearance was a 2004 Forum. Likely, his 2020′ appearance received the highest views with an average number of 428 views per program.

Being one of the successful personality, his net worth is $1 million. Other information regarding his earning is not available.

There are no rumors about him up to now. Similarly, he has not been a part of controversies too.

Jonathan Safran Foer seems to have decent height and weight. But their exact measurements are unknown.

Looking at his pictures, we can say that he has black colored hair with dark brown colored eyes.

Jonathan is active on Twitter with around 2.2K followers. His Facebook page also holds around 72K followers.