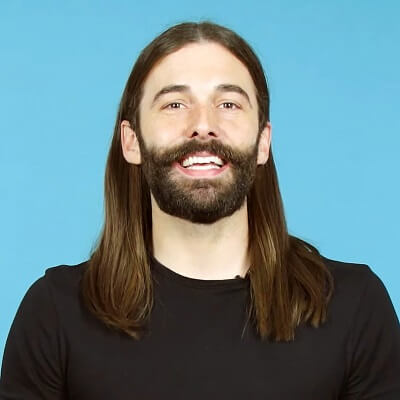 Jonathan Van Ness is non-binary and his preferred gender pronouns are he/him/his but has also openly indicated that he is okay being referred to with she/her, too.

Even though he is open about his sexuality, he has not revealed anything about his partners. He is currently single.

Who is Jonathan Van Ness?

Jonathan Van Ness is an American hairdresser and TV personality. He is best known for his appearances in the Netflix series, ‘Queer Eye’, and for his work on the web series parody ‘Gay of Thrones’.

Jonathan Van Ness was born on 28 March 1987, in Quincy, Illinois, the United States of America. As of 2020, his age is 33. He is the 6th generation of the family that owns broadcast and conglomerate Quincy media. His mother’s name is Mary Oakley Winter and she served as the vice president of the company. There is no information about his father.

Van Ness has been openly gay throughout his life and experienced bullying for his ‘femininity and natural flamboyance’ in addition to death threats. When he was young, he was sexually abused by an older guy at church which laid the foundation for his self-destructive behaviors. He started using online in his early teens to meet older men for sex. When he was in college, he started using cocaine. For funding, he later started working as a sex worker.

He dropped out of college and pursued a career in hairstyling. His ethnicity is English.

Talking about his educational background, he attended Quincy Senior High School. There, he became the school’s first male cheerleader. In college, he received a cheerleading scholarship at the University of Arizona where he majored in political science. He dropped out after just one semester. Following that, he joined the Aveda Institute in Minneapolis.

Jonathan Van Ness has an estimated net worth of around $5 million. He has earned a considerable amount of money as a hairdresser and television personality. There is no information about his exact salary. An average hairdresser earns around $26k per year whereas a TV star makes more than $45k per year on average.

After his graduation, he worked in Arizona for five years before moving to Los Angeles in 2009 where he found a job as a personal assistant at Sally Hershberger Salon. Currently, he works at MoJoHair and Stile Salon which he co-founded.

He became a well-known hairdresser and used to style hair for celebrities. In 2013, Erin Gibson, who worked for the comedy syndicate, Funny or Die asked him to perform his recap of a Game of Thrones episode for Funny or Die. The mini-series became the Gay of Thrones web series. In 2018, Jonathan earned a nomination for the Primetime Emmy Award for Outstanding Short Form Variety Series.

In 2015, he started the weekly podcast, ‘Getting Curious with Jonathan Van Ness’. Currently, he stars as the grooming expert on the popular Netflix revival of Queer Eye.

Van Ness started his writing career in 2020 by a picture book titled ‘Peanut goes for the Gold’. The book tells the story of a gender nonbinary guinea pig and their adventures as a rhythmic gymnastics prodigy.

He also announced Peanut goes for the Gold would partner with No Kid Hungry’s fund #savewithstories where he did a virtual reading of to support the children affected by the coronavirus pandemic.

Van Ness stands at a height of 6 feet. He weighs around 75 kg. His hair color is brown and his eyes are hazel in color.

While working as a personal assistant at Sally Hershberger Salon, he fainted in the salon while doing highlights for a client’s hair. His reports indicated that he was HIV-positive at the age of 25. Since then, he changed his life and he used it to get clean from drug abuse and publicly shared his story. He also has psoriasis, a chronic skin condition. He revealed all this in an interview with the New York Times.

You may also like to read the Bio, Career, Net Worth, and more about Teddy Riley, Jayden Haueter, John Force, and more.