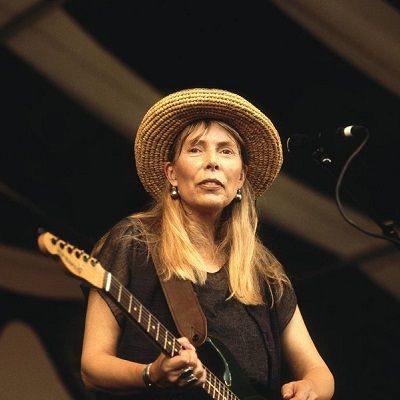 They paved paradise And put up a parking lot.

We are stardust, we are golden, We are billion year old carbon, And we got to get ourselves back to the garden.

I've looked at life from both sides now From win and lose and still somehow It's life's illusions I recall I really don't know life at all.

Mitchelle was in a relationship with Brad McMath. And in late 1964 Joni discovered she was pregnant with Kelly Dale Anderson but her birth father Brad refused it. The existence of Mitchell’s daughter was not public until 1993. After giving birth to Kilaruen, Mitchell met American folk singer Chuck Mitchell and married him 36 hours after meeting him. The couple left for Michigan where they had an official ceremony on June 1965 and she took his last name. They divorced two years later. In 1982 Mitchell married Larry Klein who is a singer, record producer, and head of Strange Cargo. But the couple eventually divorced in 1994 while they were working on Turbulent Indigo.

Who is Joni Mitchell?

Joni Mitchell is a Canadian singer and a songwriter. People know her for folk, pop, rock, and jazz genres. Mitchell’s song reflects her emotions and social and environmental ideals. Joni is a nine Grammy Awards winner and induction into 1997, Rock-and-roll Hall of Fame. Likewise, Joni Mitchell is also a painter.

Mitchell was born on November 7, 1943, in Fort Macleod, Alberta, Canada. She was born with the name Roberta Joan Anderson. Her horoscope is  Scorpio and her current age is 75.

She is the daughter of Myrtle Marguerite (McKee) and William Andrew Anderson. Her mother’s ancestors were Scottish and Irish; her father was from a Norwegian family that possibly had some Sami ancestry. Joni’s mother was a teacher while her father was a Royal Canadian Air Force flight lieutenant who instructed new pilots at RCAF Station Fort Macleod. Mitchell was their only child.

Joni went to Aden Bowman Collegiate in Saskatoon for high school. She used to take art classes from abstract expressionist painter Henry Bonli at the Saskatoon Technical Collegiate. Later, in 1963–64 she left home to attend  Alberta College of Art in Calgary. After a year, at age 20, she dropped out of school, a decision which much displeased her parents.

Her career started when she used to play gigs on weekends at her college and a local hotel.  Around this time she used to work in a coffeehouse called The Depression Coffee House, where she earned $15 a week. In 1965, she moved to the United States and began touring with American folk singer Chuck Mitchell to the US, where the two began playing music together.

In 1968, she released her career breakthrough album Clouds. This album contained Mitchell’s versions of some of her songs already recorded and performed by other artists: “Chelsea Morning”, “Both Sides, Now”, and “Tin Angel”. Later, in 1970 she won her a Grammy for the album ‘Clouds’. Joni released her third album Ladies of the Canyon which was an instant smash on FM radio and sold briskly, eventually becoming Mitchell’s first gold album (selling over a half-million copies). Her album Blue which she released in 1971 was her 4th album and also cited as one of the best albums of all time.

Mitchell is one of the biggest contributors to the musical world. Throughout her career, she has won around 9 Grammys which itself is a major achievement. She won her first Grammy in 1969 for the Best Folk Performances. Also, she won 3 Juno awards and was in nomination for several awards. In 1981 she was inducted into the Canadian Music Hall of Fame and received the Governor General’s Performing Arts Award for Lifetime Artistic Achievement,

Joni is a legendary singer and songwriter, during her lifetime she earned a decent amount of money. According to the sources her estimated net worth is around $50million.  She has earned that sum of money from her singing and acting career.

Mitchell had health issues for a long time, she contracted Polio when she was 9 years old and was hospitalized for weeks. However, on April 28, 2015, people started a rumor that Mitchell was in a coma and unresponsive. But later one of Joni’s spokesperson reported it to be fake. The Canadian was suffering from an aneurysm instead. She was found unconscious in her Bel Air home and was rushed to Los Angeles-area hospital in an ambulance.

Joni also revealed her controversial disease of Morgellons syndrome. It is a self-diagnosed skin condition where an individual claim to exhibit sores, which they believe “contain” some sort of fibrous material.

On September 06, 2014, the Canadian singer passed away according to an internet death hoax. Rumors of the singer’s alleged demise gained traction on Saturday after a ‘R.I.P. Joni Mitchell’ Facebook page attracted nearly one million of ‘likes’, and hundreds of people gave their condolences on her Facebook page. However, it was not true, and she is Alive And Well.

Joni’s eyes are light blue and her hair is Dyed Brown. She is 5ft 5 inches tall and her shoe size is 9 (US), likewise, her body measurements are a 36-inch bust, 24-inch waist and. 36-inch hips.

An insight on the affairs, net worth, body stats of other actresses Emma Davies, Drena De Niro, Scottie Thompson