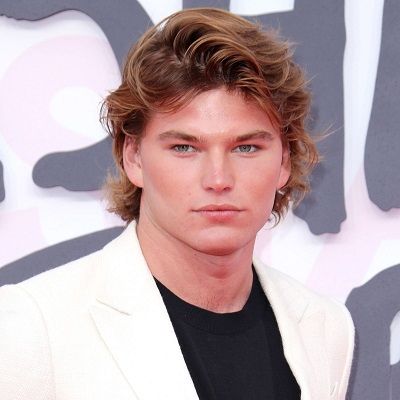 He is presently single. But he was rumored to be in a relationship with several celebrities and model in the past. In the summer of 2016, he was reportedly having an affair with Dutch model Lara Stone. They were spotted getting cozy at numerous high profile events. They were pictured leaving Vogue 100 party together.

In the early weeks of June 2016, Jordan was rumored to be going out with American model Hailey Baldwin. As per the reports, they were spotted getting amorous at the Moschino Fashion Show.

Later in May 2016, he was spotted holding hands with the then 32-year-old model Lara Stone when they left a Vogue party in Kensington Gardens, London. They were seen all over each other while partying in Cannes where Barrett was captured planting a kiss on a stone. Several tabloids confirmed them as a couple, however, they never addressed the news.

Jordan was linked with model Kaia Gerber by media in October 2017 after they were pictured embracing, after having attended the CR Fashion Book party in Paris. In September, they were pictured partying together at an event organized by Paper magazine.

Who is Jordan Barrett?

Jordan Barrett is MG Worldwide-signed and New York-based model. He is also an Instagram star having more than 1.1 million followers in his official account.

The Australian model Jordan Kale Barrett came into the limelight after Models.com selected him as the “Model of the Year” in 2016.

Within some years of his modeling career, Barrett has earned several honors including “Man Of Style” award at The GQ.

His father, Adrian was a convicted drug dealer. In 2013, Adrian, then-54 along with his accomplice Allison Cale, then-34 was sentenced to eight years in prison after being proven guilty of eight drug-related offenses.

When he was only 14, the IMG Australia, a modeling scout scouted him. He began his career when he was 17.

He holds an Australian nationality and belongs to a mixed ethnic group.

The aspiring model Barrett has been secretive regarding his educational background.

Jordan Barrett’s career started taking shape after he was discovered by the international modeling scouting agency IMG. At that time, he was only 14 and was caught stealing matches from a convenience store. Later he reminisced the incident during an interview with Vanity Fair.

He kicked off his modeling career at 17 where his first job was in Tokyo, Japan, but it was only a year after he officially signed with IMG.

Barrett appeared in the campaigns for Tom Ford, Versace, Moschino, Balmain as well as Coach. Further, he has also get featured on the covers of several magazines including Vogue Netherlands Man, The London Times, and Wonderland Magazine. As of now, Jordan is a model of the new 1 Million Fragrance Spot.

In 2017, he made his theatrical film debut in the music film, Double Dutchess: Seeing Double, which had pop singer Fergie as the central figure.

Jordan Barrett received the Man of Style award at The GQ Awards. Moreover, he was also The Models of the Year by the Models.com in 2016. As well as Vogue named him the Model It Boy of the new Era.

The Australia born 23-year-old model has already established him as one of the finest emerging models in the world. He has worked for several renowned international magazines and worked for many modeling agencies. No doubt he earns a decent sum of money from his career, however, as of now, his exact net worth and earnings are unknown.

Looking at his proficiency and skill, Barrett’s net worth should range in $thousands. According to the Paysa.com, an average model earns more than $51,000 annually, but the amount may vary according to their work excellency, demand, and experience.

In the early months of 2015, Jordan was rumored that he is dating a socialite and TV personality, Paris Hilton.

Furthermore, another rumor was about his relationship that he was dating English model and actress Suki Waterhouse at the end of July 2016.

Jordan Barrett is active on different social media platforms. He uses Instagram and has more than 1.1M followers on it. Furthermore, he has over 8K followers on his Twitter account. He doesn’t seem to be active on Facebook.

Yarden Haham
Tags : Man Of Style Model Model It Boy of the new Era The Models of the Year
Suggest Bio Update