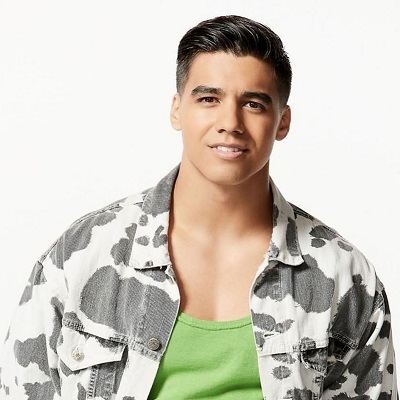 Jordan Buhathas already found the love of his life. He is married to Lucy Buhat who is an athlete.

The couple started their relationship as a friend. Later, they became best friends. Moving forward, the friendship bloomed into love. On the 8th of December 2019, they got engaged with each other.

Later, on the 21st of February 2020, they exchanged vows with each other. The wedding took place as a private event in front of their friends.

Who is Jordan Buhat?

Canadian Jordan Buhat is an actor. He is renowned as Vivek Shah of the TV series, Grown-ish.

Jordan Buhat was born on the 1st of December 1992 in Provincial capital of Alberta, Edmonton. He is of British-Irish ethnicity.

Till the date, he has not shared any details on his mother, father, and siblings.

Talking about his educational background, he is a graduate of the University of Alberta. He received a bachelor’s degree with Honors in Performing arts.

During University days, Jordan Buhat used to perform as a stage performer. At the time, he has performed in more than 15 stage shows. After graduation, he relocated himself to Vancouver to start a career in the entertainment industry.

In 2018, he debuted in movies with the movie, Summer of 84. In the horror movie, he portrayed the character of Dorky Customer. The same year, he made his appearance in the TV Movie, Blurt as Jock.

The following year, he featured the TV series, Jamall & Gerald in a minor character of Duggy. His character in the series was limited to two episodes only.

Since 2018, he is appearing in the spin-off show of Black-ish series, Grown-ish. In the series, he is portraying the character of Gujarati Indian-American, Vivek Shah.

Vivek works as a drugs-dealer for his fashion interest. Also, he is renowned in the college for his style that is influenced by black culture.

Currently, talent management companies like Play Management and The X Division represents him.

Till the date, he has managed to maintain his divinity as an actor. As of now, he has not been involved in any type of controversy and rumors that created a buzz in the media.

Also, he has managed to remain far from any sort of rumors too.

Jordan Buhat has black eyes with black hair. His height is 5 feet 6 inches and has a decent weight with a build body physique.

Talking about his appearance, he has a charming personality with a long facial-structure. Also, he prefers to be clean-shaven too.

Also, Jordan has a self-titled YouTube channel with over 5.71k subscribers.

Apart from that, he is also active on TikTok with more than 25.7k followers and around 344.4k likes.

You may also read the bio of Rush Holland, Nate Wyatt, and LoveLeo (Leo Reilly).