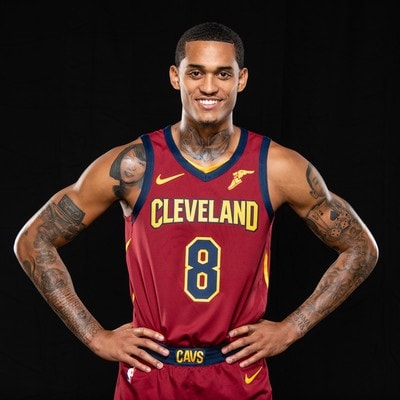 Jordan Clarkson is currently in a relationship. He is dating his beloved girlfriend, Bella Hadid, model. The pair haven’t revealed much about their relationships to media.

Previously, he was in relationships with several girls including Kendall Jenner, Chanel Imen and, Chantell Jeffries.

Who is Jordan Clarkson?

Jordan Clarkson is a Filipino-American basketball player who is currently playing for the Cleveland Cavaliers of the National Basketball Association (NBA) along with Kevin Love, George Hill, and LeBron James. Previously, he played four years for Los Angeles lakers.

He was born on June 7, 1992, in Tampa, Florida. He was born as Jordan Taylor Clarkson. Jordan was born to father Mike Clarkson, and mother Annette Davis. He has a brother named Bear Clarkson.

Jordan holds American and Philippine citizenship and his ethnicity is African-American.

He averaged 20 points, six rebounds and four assists per game as well, which leads his team to the semi-final of the Class 5A championship during his junior year and averaging 18.9 points per game in his senior year.

He has been honored with 2011 Conference USA All-Freshman team during his first season with Tulsa.

After that, he was selected to the All-Conference USA first team and the NABC All-District 11 team in his sophomore season. Jordan was moved to Missouri in May 2012 and named of the 2014 All-SEC second team in his junior season.

Moreover, he played with the Angeles for four seasons and during that time he also became Rookie of the Month (2015), NBA All-Rookie First Team, and Rising Stars Challenge participant (2016).

Clarkson won three Southeastern Conference Player of the Week honors and named to the Wooden Award Midseason Top 25 list in January 2014 as well.

He has an estimated net worth of around $10 million and he has earned that sum of money from his career. He had $6.5 million net worth in 2016. Also, he earns around $12.5 million from his current team, which makes his total career earnings to be around $38 million.

In addition, he is often seen in his Lamborghini Huracan worth about $300,000. Earlier, Jordan was also spotted riding Porche and Range Rover. Moreover, he earns from his endorsement deals like deal with a Filipino company called “Smart Bro” and starring in the ad.

Also, there was a rumor that he dated Hailey Baldwin, an American model and the daughter of actor Stephen Baldwin.